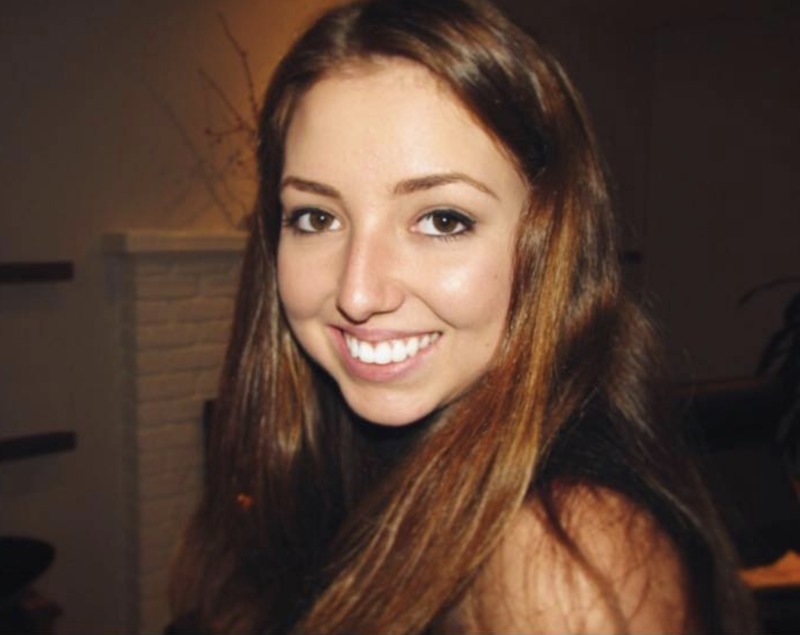 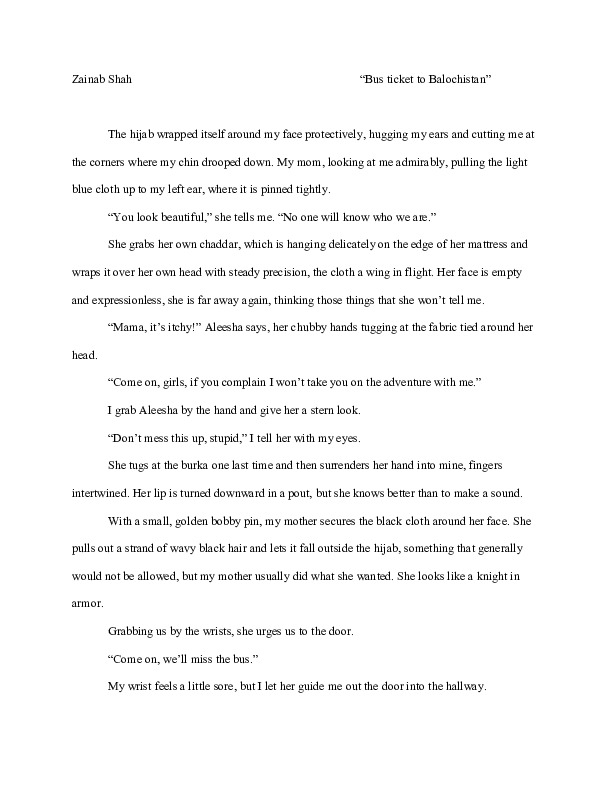 PDF version of “Bus ticket to Balochistan” by Zainab Shah

The hijab wrapped itself around my face protectively, hugging my ears and cutting me at the corners where my chin drooped down. My mom, looking at me admirably, pulling the light blue cloth up to my left ear, where it is pinned tightly.

“You look beautiful,” she tells me. “No one will know who we are.”

She grabs her own chaddar, which is hanging delicately on the edge of her mattress and wraps it over her own head with steady precision, the cloth a wing in flight. Her face is empty and expressionless, she is far away again, thinking those things that she won’t tell me.

“Mama, it’s itchy!” Aleesha says, her chubby hands tugging at the fabric tied around her head.

“Come on, girls, if you complain I won’t take you on the adventure with me.”

I grab Aleesha by the hand and give her a stern look.

“Don’t mess this up, stupid,” I tell her with my eyes.

She tugs at the burka one last time and then surrenders her hand into mine, fingers intertwined. Her lip is turned downward in a pout, but she knows better than to make a sound.

With a small, golden bobby pin, my mother secures the black cloth around her face. She pulls out a strand of wavy black hair and lets it fall outside the hijab, something that generally would not be allowed, but my mother usually did what she wanted. She looks like a knight in armor.

Grabbing us by the wrists, she urges us to the door.

My wrist feels a little sore, but I let her guide me out the door into the hallway.

“Will we be coming back, Mama? We can’t leave Balloo alone for too long.” I asked.

“It’s just a dog, Zainab. And we’ll be back later tonight. I just want to show you both something. You don’t see enough. I need to show you.”

“But what do we have to see? Everything is here. Can we get ice cream instead?” Aleesha said, still pouting from her scolding.

Mom looks at us contentiously. Her eyes start to go black around the edges, and I knew I had to bring her back, or she would go back to sleep and we wouldn’t go on any adventures after all.

“Don’t be stupid, girls. There’s more to life than ice cream. Now stop fussing, this is supposed to be fun.”

I want to pinch Aleesha for whining, but she is on the other side of Mama, protected.

“Don’t complain, or she’ll go back to her room to be angry again, and this time it will be your fault,” I tell Aleesha with my eyes.

She looks back me with understanding.

The last time Mama got angry, it was because of me. We were sitting at the dining room table, and I asked her why the Urdu-speaking people didn’t sit with us and ate their food in the kitchen.

“We even have an extra seat now ’cause Dad isn’t here.”

Mom had snapped her head towards me with eyes so black I felt cold.

“Don’t ever call them that again. Unless you want to take their place eating dinner in the kitchen and helping around the house. They are older than you and deserve respect.”

And before I could say sorry, she left the table, food unfinished, and shut herself off in the room.

When Mama got into her moods, she would lock her door and take a nap that lasted for hours and hours. I would sit by the crevice of the door and stick my fingers through the bottom, feeling a light breeze of the air conditioner against the tiled floor. If I heard her making sounds inside, I’d make knocking patterns until she opened the door. Usually, it was to yell at me, but sometimes she would let me come inside and crawl into bed with her.

I’d lie down next to her as she drew little shapes on my back with her fingers. She called these the “teepee typee” cuddles. I loved these moments the most because it was just Mama and me. She would draw these shapes until her hands began to weaken and she’d let out the first whistling snores of sleep. I could never fall asleep, but I’d always stay there with her, melodizing my breath to fall into the same tempo as hers. My hands would get pins and needles from being tucked into my mother’s large hug, but I dared not move, for fear that I’d wake her up.

After Mom hired Saania Apa to take care of us, we wouldn’t share as many Teepee Typee moments. If Saania Apa caught me sitting by the floor of Mama’s bedroom, she would scoop me up with rough hands and drag me away.

Saania Apa always had a lot to say about God. She would tell us stories about Jinns sent by the devil, who would jump into girls’ bodies if they walked outside after sunset with their hair untied. I figured it was best to listen to people that knew a lot of things the way that she did, and never walked outside again after the Maghrib prayer, which was called at the peeking cusp of sunset. All the same, I’d decided that Saania Apa was not my friend and Aleesha and I decided spying on her in the kitchen in scheming out the best way to get revenge.

Now, Saania Apa stood in the kitchen doorway, waiting for the moment that my mother would give up on the attempted adventure. But Mama was determined this time. Despite the struggle of getting us to wear our hijabs, something we hardly ever did, she wore a tight smirk on her face, her eyes fierce and blazing with anticipation.

“Take this,” she said as she handed me a 100 Rupee bill. “You’re gonna buy the tickets for us. And listen, if you want to speak to me, speak to me in Urdu. There will be no English baath on the bus, okay? My angrais children. ”

Angrais. English. I hated when she called us that.

“Mama, where are we going?”

“Balochistan. It’s the province right next to Sindh. The bus is only two hours long. Two hours isn’t long for a big girl. Aren’t you a big girl, Zainab?”

I wanted to say yes, but no words were coming out of my mouth. I puffed up my chest and looked up into her eyes to show her how brave I was. Chills scattered down my spine as she looked back at me with a smile on her face.

And with that, she grabbed our hands and walked us out the front door, our chaddars flying behind us like capes.