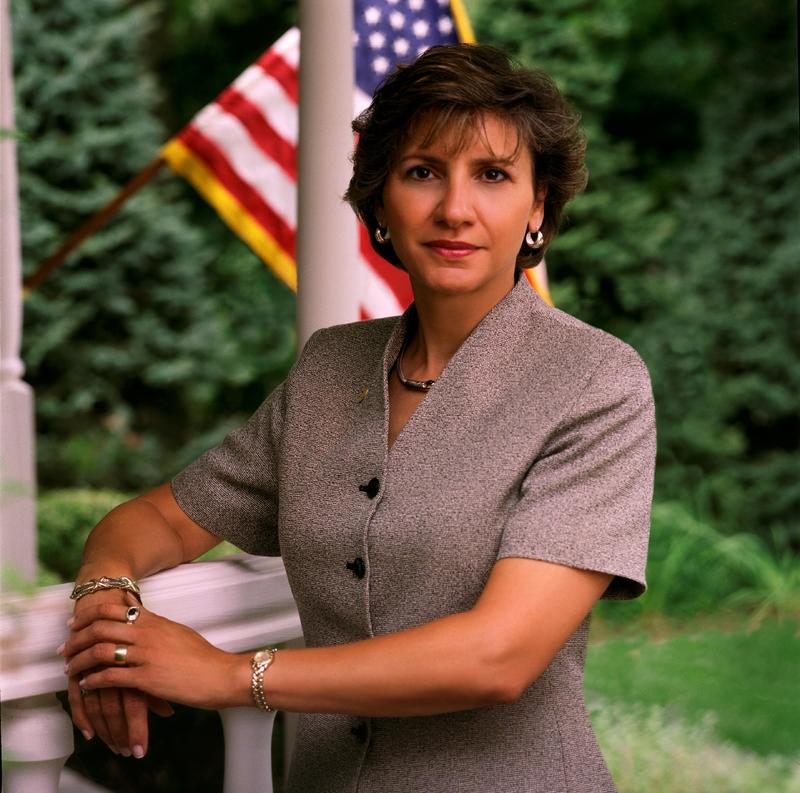 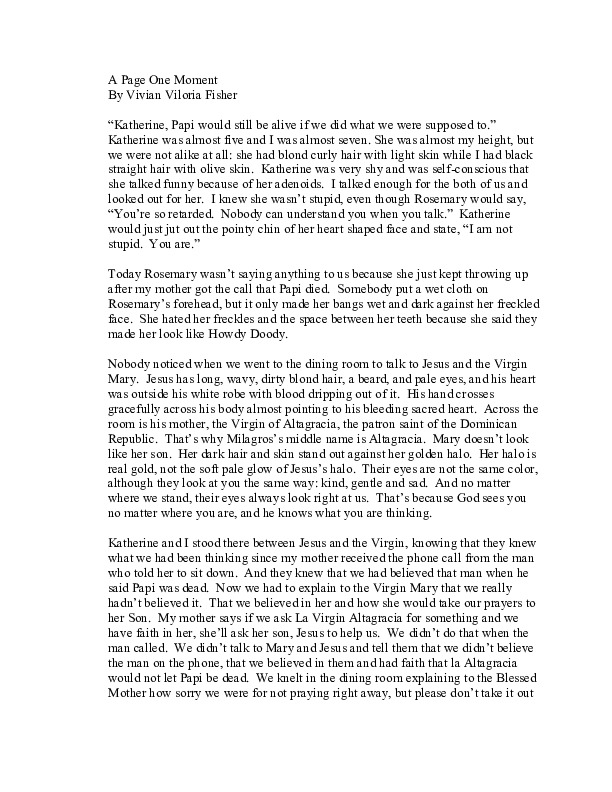 “Katherine, Papi would still be alive if we did what we were supposed to.”  Katherine was almost five and I was almost seven. She was almost my height, but we were not alike at all: she had blond curly hair with light skin while I had black straight hair with olive skin.  Katherine was very shy and was self-conscious that she talked funny because of her adenoids.  I talked enough for the both of us and looked out for her.  I knew she wasn’t stupid, even though Rosemary would say, “You’re so retarded.  Nobody can understand you when you talk.”  Katherine would just jut out the pointy chin of her heart shaped face and state, “I am not stupid.  You are.”

Today Rosemary wasn’t saying anything to us because she just kept throwing up after my mother got the call that Papi died.  Somebody put a wet cloth on Rosemary’s forehead, but it only made her bangs wet and dark against her freckled face.  She hated her freckles and the space between her teeth because she said they made her look like Howdy Doody.

Nobody noticed when we went to the dining room to talk to Jesus and the Virgin Mary.  Jesus has long, wavy, dirty blond hair, a beard, and pale eyes, and his heart was outside his white robe with blood dripping out of it.  His hand crosses gracefully across his body almost pointing to his bleeding sacred heart.  Across the room is his mother, the Virgin of Altagracia, the patron saint of the Dominican Republic.  That’s why Milagros’s middle name is Altagracia.  Mary doesn’t look like her son.  Her dark hair and skin stand out against her golden halo.  Her halo is real gold, not the soft pale glow of Jesus’s halo.  Their eyes are not the same color, although they look at you the same way: kind, gentle and sad.  And no matter where we stand, their eyes always look right at us.  That’s because God sees you no matter where you are, and he knows what you are thinking.

Katherine and I stood there between Jesus and the Virgin, knowing that they knew what we had been thinking since my mother received the phone call from the man who told her to sit down.  And they knew that we had believed that man when he said Papi was dead.  Now we had to explain to the Virgin Mary that we really hadn’t believed it.  That we believed in her and how she would take our prayers to her Son.  My mother says if we ask La Virgin Altagracia for something and we have faith in her, she’ll ask her son, Jesus to help us.  We didn’t do that when the man called.  We didn’t talk to Mary and Jesus and tell them that we didn’t believe the man on the phone, that we believed in them and had faith that la Altagracia would not let Papi be dead.  We knelt in the dining room explaining to the Blessed Mother how sorry we were for not praying right away, but please don’t take it out on our father.  Please let him still be alive.  Please let it be another man.  Maybe the man on the phone made a mistake.

Katherine and I prayed while my mother lay down on the couch with her back arched and her hands stiffened as gasping sobs escaped violently from her outstretched neck so that we were afraid she might die too.  We prayed with Milagros, who was nine years old and was worried that our mother would never stop crying.  We prayed when Papito cried because he was only sixteen and now he had to be the man of the house like Papi told him just before he boarded the plane at Idlewild.  We prayed when more and more people came to the apartment and held poor baby Billy who would never remember his father.  We prayed while everybody went to the funeral parlor, but Billy, Katherine and I were not allowed because we were too little.

We thought our prayers were answered when they came home and Milagros told us that it didn’t look like him in the coffin.  The man in the casket looked weak and skinny.  “See, I told you Katherine.  The man on the phone made a mistake.  It wasn’t Papi.  Milagros, we told the Virgin that we have faith and we don’t believe Papi was dead and she believed us.  So now, it’s not true.  He isn’t the man in the funeral.  We need to find him.”

Milagros looked at me with the eyes of Jesus and Mary: gentle, kind, and sad.  The auburn streaks in her curly hair framed her delicate face like a halo.  She was the pretty one, the fragile child who had almost died as a baby and had been hit by a car walking home from school in second grade.  She looked at Katherine and me, now knowing why we had been kneeling together in that dining room, and a big tear drop rolled from her shiny black eyes down her cheek.  “You can’t look for him, Vivian.  He’s dead.”

Words tap my shoulder from time to time and ask, “Guess who?”  Spanish words, words that floated like colored ribbons untethered to the everyday English of our childhood.  My mother’s exasperated words. “¡Soy la e’clava de la casa!”  “I am just the slave of this house!”  And I would wonder why she called herself a “clavo,” a “nail.”

Her Spanish words were thrown up into the air—too high to grasp yet low enough to gaze at or be startled by their pop.  Exclamatory words like:  ¡Qué barbaridad!” or “Ave María Purísima.”  Or sayings like, “El vago trabaja dos veces,” “the lazy man works twice,” a fitting lesson when we tried to take the garbage out two bags at a time and one invariably broke.  Comforting Spanish words, “Sana, sana, culito de rana, si no se sana hoy se sana mañana,” “Heal, heal, frog’s little bottom.  If it doesn’t heal today it will heal tomorrow.”  Sometimes tired words: “agotada,” “drained.”  These incorporeal words touched the floor, grew legs and eyes and arms that embraced me when I rediscovered them in my Spanish classes.  “Agotada” gave up its linguistic secret: “gota,” drop.  My mother’s plaintiff exhaustion, drops of energy drawn out of her in the struggle to simply survive.

Most of our Spanish words were bound in songs, songs that we sang on Saturday mornings while we cleaned house.  “La historia de un amor,” “A Love Story,” had one particular line—“Que me hizo comprender todo el bien todo el mal,” “that made me understand all the good, all the bad”—that took me by surprise when I found the lyrics to sing at a fiesta with my students.  I had always heard and sung, “Que me hizo comprender todo el viento del mar,” “that made me understand all the wind of the sea.”  The stunning beauty of the lyrics: “Que me dio luz a mi vida/Apagándola después/Ay, que noche tan oscura…. Ya no estás más a mi lado, corazón/En el alma sólo queda soledad/Y si ya no puedo verte/¿por qué Dios me hizo quererte?/Para hacerme sufrir más,”  “That gave Light to my life/ only to later put it out/Ay, what a dark night/You are no longer at my side, my love/There is only solitude in my soul/And if I can no longer see you/why did God make me love you?/Just to make me suffer more.”  These words drew out the long forgotten image of my mother gazing far beyond the laundry she was folding, singing of the love without equal that she had lost.

There was one word that eluded me although it was heavier and darker than the rest.  I was permitted to read, define it, write it, but I let it slip through my fingers again and again without owning it: “De repente,” “suddenly.”  I squared off, feet planted firmly, confronting the verb that preceded this dreaded adverb. “MURIO DE REPENTE,” “HE DIED SUDDENLY,” words inextricably connected in the moment that rent the security of my childhood.

De repente.  I wrestled it into a poem.  It wrestled me to the mirror of my soul.