"Every Time I Look Back" by Anonymous High School Student 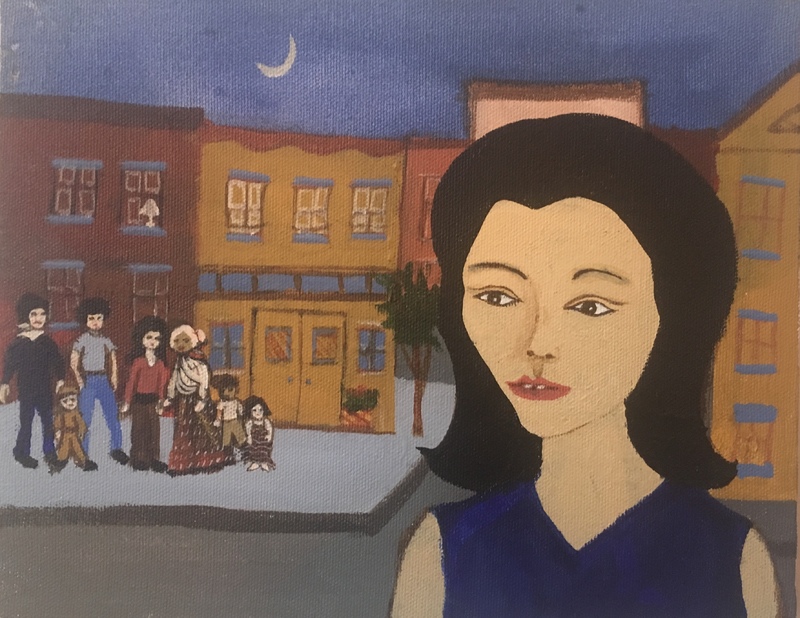 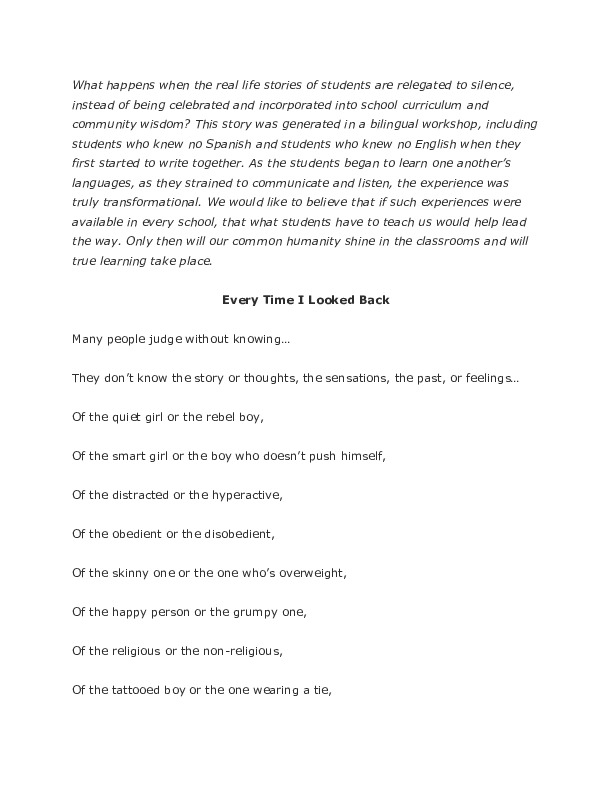 What happens when the real life stories of students are relegated to silence, instead of being celebrated and incorporated into school curriculum and community wisdom? This story was generated in a bilingual workshop, including students who knew no Spanish and students who knew no English when they first started to write together. As the students began to learn one another’s languages, as they strained to communicate and listen, the experience was truly transformational. We would like to believe that if such experiences were available in every school, that what students have to teach us would help lead the way. Only then will our common humanity shine in the classrooms and will true learning take place.

Every Time I Looked Back

Many people judge without knowing…

They don’t know the story or thoughts, the sensations, the past, or feelings…

Of the quiet girl or the rebel boy,

Of the smart girl or the boy who doesn’t push himself,

Of the distracted or the hyperactive,

Of the obedient or the disobedient,

Of the skinny one or the one who’s overweight,

Of the happy person or the grumpy one,

Of the religious or the non-religious,

Of the tattooed boy or the one wearing a tie,

Of the one born here or the immigrant,

Of the successful one or the failed one,

Of the crazy or the sane,

Of the healthy or the sick,

Of the smoker or the one who doesn’t smoke…

You never know what life has in store for you. You want something, but destiny, God, life, or whatever you want to call it, doesn’t want the same thing.

You think and want something, you work hard to obtain it, but you simply can’t.

The greatest pain in life is to feel that the thing you love the most is taken away from you, to think that you’ll spend your whole life with the people who watched you grow.

Before I left my home, so many things happened, some good, some bad, but all of them unforgettable.

Every morning when I got out of bed, I’d look up with the same thought: Live this day as if it were your last.

I’d always leave the house saying “I love you,” to my first love, to the person I always want to have close to me: my grandmother. To her, the woman I’d give my life for.

The day came when God and my mother gave me the opportunity to be on Earth, to see the sunrise and the sunset, but my heart didn’t want that day to come.

The day of my birthday. A common day, not interesting. A regular day of school, friends, family. A normal but happy day knowing that I’d spent another year with the people I loved most.

Two days earlier, I left home knowing that when I came back, my family would be there to celebrate with me. I left imagining that when I returned I’d be with them.

However, I spent the morning feeling something inside. What was it? I didn’t know. I didn’t give it much importance.

Minutes later, the phone rang: an unexpected call at an unexpected moment. My cousin picked up and the only things I saw were her strange looks towards me, facial expressions and words that I couldn’t understand. The only thing I wanted at that moment was to know what was going on.

Minutes later, my cousin ends the call and the only thing she said to me was, “You’re leaving. In an hour, you’re leaving!”

She only said, “With your mother.”

At that moment a wave of emotions engulfed me. I felt mad, sad, desperate!

With tears in my eyes, all I could say was I didn’t want to go. At that moment I just wanted to disappear or for it all to be a joke or a dream.

I then thought about my family, and all they’d done for me, my friends, my goals. Oh, God!

When I was waiting for the bus to go home, I had the intention to escape and come back when everything was over. I filled myself with courage, which I did by crying, without caring where I was or who saw me.

So I got on a different bus, but my cousin got on with me, and I couldn’t escape. This just got me even madder. We got off the bus and started walking. I walked and thought about what was going to happen with everything.

Every step I took was a tear I shed. Every thought, every feeling. I left my cousin behind as I walked and didn’t care. I didn’t care about anything. I just wanted a car to run me over so I could stop feeling.

When I got home I didn’t say a word. I just turned to look at my grandparents, looked down and walked towards my room. I wanted to lie in my bed, while my cousin arrived and told them the news.

When she got there, they asked her what was wrong with me, why was I crying, why my silence? She told them what was happening, and they all remained silent a moment, understanding and accompanying me in my pain.

My cousin and my grandfather were the only ones who took things with maturity.

I got off my bed and went towards my grandmother saying, “Please, don’t let me go.”

With tears in her eyes, she replied, “Hija, there is nothing I can do.”

With sorrow in my soul, I looked down and didn’t say another word. I just sat there in silence while the moment came.

They say one of the hardest things in life is to say goodbye to the people you never thought you’d lose. The only words I said to them were that I loved them and to never forget me or the love I felt for them.

But I couldn’t say it to everyone.

We had to take a bus to the place where I would meet my mom’s cousin. He was also leaving that day, and I would go on my journey with him. I think I only met him once. He just said, “Hi, good afternoon,” and that was it. My family told me that it was okay to go with him since they knew him, and besides, he was family. They knew him, not me. I barely knew his name.

On the bus ride, I was thinking about the reasons a person has to leave everything behind to start a new life. And I asked myself, why do I have to go to live in a place where I don’t want to live?

My head started spinning, and I didn’t know how to stop it. Everybody kept saying that I shouldn’t feel bad, that I shouldn’t cry, because I was going to be with my mother. But that was the problem – I didn’t get along with her.

When my mom left me, I was only 6 years old. But, even in those six years I spent living with her, our relationship was never close. No matter where I was, I always asked to be with my grandmother.

One day, after staying with my grandma, she and my mom had an argument. My mom took me with her. They say that day, in the middle of the night, I woke up crying because I wanted to go back to my grandmother’s. A 4-year-old girl crying because she wanted to be with her grandma and not with her own mother.

On my 10-minute bus ride to the place where I would meet my mom’s cousin, I kept thinking about her: a single mother, a girl from a humble family who had to leave her daughter to pursue the American Dream, not because she wanted to, but because she needed to.

I was looking through the bus window and could see my reflection. I could also see my cousin’s reflection. When our eyes met, she immediately looked down, avoiding my gaze.

We reached the place where I would have to give a definitive goodbye. It was so difficult to get off that bus without anyone pressing me to do it. It was difficult to stand up and walk towards the exit voluntarily.

We waited for about 10 or 15 minutes. My cousin, aunt and grandmother were with me. My grandfather wasn’t there, but he did say something to me before I left, “I knew this day would come, but I never thought that it would happen precisely today.”

When he said these words to me, not once did he look at me, he just looked straight ahead and to the side. It hurt so much because we’d planned to spend the next day together. I could only ask him to forgive me for not being able to keep the promise. He simply answered for me not to worry, that it wasn’t important.

My mom’s cousin arrived. After a brief greeting, he also told me to not be sad.

I simply remained silent, because I knew if I talked, I would not say pretty things.

My eyes were filled with tears. I felt a huge knot in my throat and a great urge to scream.

The moment to give the definitive goodbye had come. I felt as if I was living a scene of a movie or soap opera. I felt like when you are holding someone’s hand and you are forced to let it go. They stay, you go. Everything fades to gray, darkness; everything is silent and happening slowly.

With every step I took, I looked back. Every time I looked, my family was farther and farther away from me.

My tears stopped falling. I looked up and kept walking.

My mom’s cousin and I took a taxi. After that, we took a bus. This bus trip would be 30-40 minutes long, but this was only one of many buses we would have to take.

When I got on that bus, it seemed I was complete on the outside, but on the inside I was in pieces.

My heart was beating only because it had to.

—Hija, yo no puedo hacer nada.

Pero no pude decírselo a todos.