"For Marcelo" by Susan Perretti 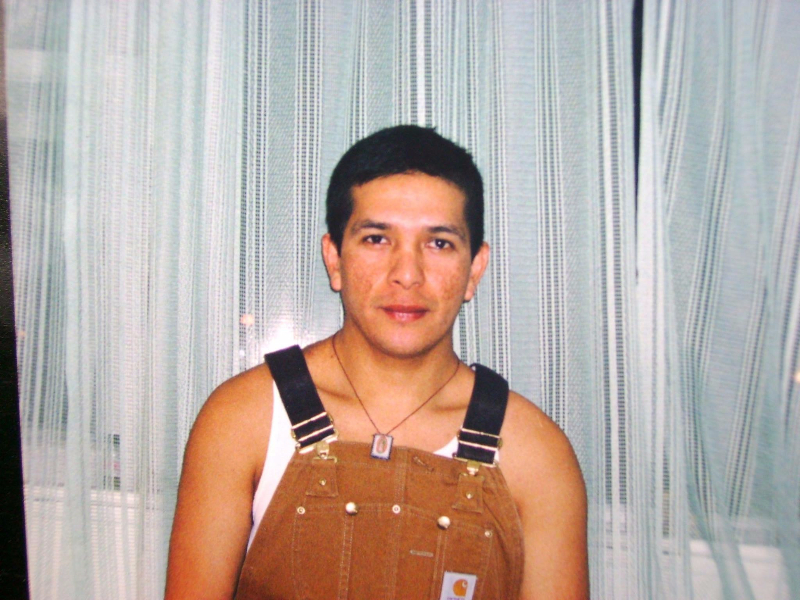 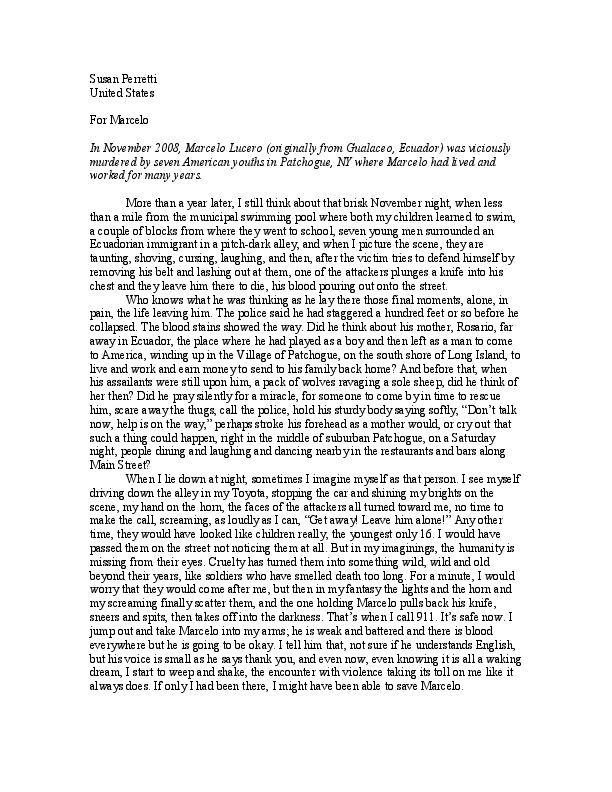 PDF version of "For Marcelo" by Susan Perretti (English version) 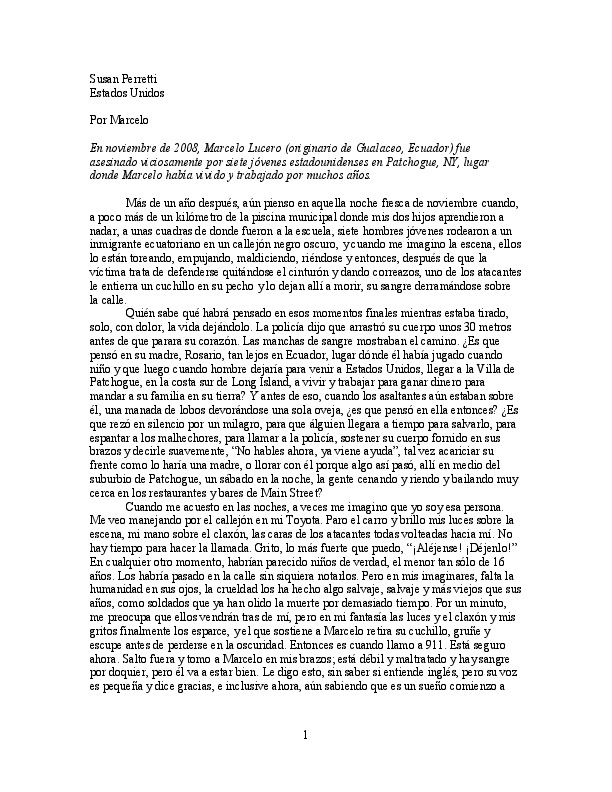 In November 2008, Marcelo Lucero (originally from Gualaceo, Ecuador) was viciously murdered by seven American youths in Patchogue, NY where Marcelo had lived and worked for many years.

More than a year later, I still think about that brisk November night, when less than a mile from the municipal swimming pool where both my children learned to swim, a couple of blocks from where they went to school, seven young men surrounded an Ecuadorian immigrant in a pitch-dark alley, and when I picture the scene, they are taunting, shoving, cursing, laughing, and then, after the victim tries to defend himself by removing his belt and lashing out at them, one of the attackers plunges a knife into his chest and they leave him there to die, his blood pouring out onto the street.

Who knows what he was thinking as he lay there those final moments, alone, in pain, the life leaving him. The police said he had staggered a hundred feet or so before he collapsed. The blood stains showed the way. Did he think about his mother, Rosario, far away in Ecuador, the place where he had played as a boy and then left as a man to come to America, winding up in the Village of Patchogue, on the south shore of Long Island, to live and work and earn money to send to his family back home? And before that, when his assailants were still upon him, a pack of wolves ravaging a sole sheep, did he think of her then? Did he pray silently for a miracle, for someone to come by in time to rescue him, scare away the thugs, call the police, hold his sturdy body saying softly, “Don’t talk now, help is on the way,” perhaps stroke his forehead as a mother would, or cry out that such a thing could happen, right in the middle of suburban Patchogue, on a Saturday night, people dining and laughing and dancing nearby in the restaurants and bars along Main Street?

When I lie down at night, sometimes I imagine myself as that person. I see myself driving down the alley in my Toyota, stopping the car and shining my brights on the scene, my hand on the horn, the faces of the attackers all turned toward me, no time to make the call, screaming, as loudly as I can, “Get away! Leave him alone!” Any other time, they would have looked like children really, the youngest only 16. I would have passed them on the street not noticing them at all. But in my imaginings, the humanity is missing from their eyes. Cruelty has turned them into something wild, wild and old beyond their years, like soldiers who have smelled death too long. For a minute, I would worry that they would come after me, but then in my fantasy the lights and the horn and my screaming finally scatter them, and the one holding Marcelo pulls back his knife, sneers and spits, then takes off into the darkness. That’s when I call 911. It’s safe now. I jump out and take Marcelo into my arms; he is weak and battered and there is blood everywhere but he is going to be okay. I tell him that, not sure if he understands English, but his voice is small as he says thank you, and even now, even knowing it is all a waking dream, I start to weep and shake, the encounter with violence taking its toll on me like it always does. If only I had been there, I might have been able to save Marcelo.

The night Marcelo died, Chuck and I were right in the village, a short walk from where the murder took place. It was the night of our musician friend Jack’s annual “world peace party,” and this year, Jack had kids from a local high school bring the drums they had built themselves down to the Congregational Church on Main Street, so we could start off the evening with a giant drumming circle. Jack was leading us from up on the sanctuary where he sat hunched over his big African djembe, tapping out the rhythm and inviting us to join in. I had my little drum that Chuck had given me one Christmas, and I was pounding on it, trying to keep up. After a while, all the drums in the room started to beat as one, and it was like we had come together to become one mighty heart, and the whole chapel was vibrating.

When I saw the newspaper article the next morning, I stared at the photo of Marcelo, the picture that people all over the country would see again and again in the days and weeks to come—the one where he is wearing a cream-colored baseball cap, looking much younger than his 38 years, even boyish. He is smiling, his face is handsome and kind, his shoulders broad, some kind of chain—perhaps a crucifix—is dangling from his neck. As I read the story, my stomach turned, and I had to pull away. “Oh, my God!” I said, and Chuck came over and we finished reading it together. Just blocks from where we had been—I kept saying that to Chuck. I couldn’t get that thought out of my mind.

The next day, on the cover of the newspaper, there was a large photograph of Marcelo’s mother, Rosario, a small, simple woman, and the grief made her look even smaller, as she was held up by others from her village of Gualaceo, where Marcelo and his brother and sisters had run along the cobblestone streets, kicking a ball, perhaps, or just chasing after one another, as boys and girls of that age do. And underneath her photo were her words: “We are human beings!”

The following Friday, Chuck and I walked in the misty rain, weaving in and around the hundreds of people who had come out for the evening candlelight vigil near the place where Marcelo died. Off in the distance, I could see the little shrine that the people had created, flowers and messages and rosary beads, and a painting of Marcelo propped against the makeshift stage. Chuck had forgotten something in the car, so I was standing by myself, fumbling with my candle, trying to get it lit, feeling self-conscious and wondering whether the mostly Latino crowd even wanted me there at all, an Anglo woman. A young Latina who had been watching me came over with her candle and lit mine with its flame. “Gracias,” I said, and she smiled. Many people were holding signs, mostly in Spanish. A little girl held a poster that read, “We are all One.” Joselo, the brother of Marcelo, had stepped up to the microphone. He was asking us to put aside our anger and to work to make sure that Marcelo’s death was not in vain, that it would awaken people to the rash of hate crimes against Latinos on Long Island.

When Joselo finished, cheers and applause and then a spontaneous chant in Spanish rang out. I longed to join in, but the little Spanish I remembered from college was not enough, so I lifted my candle high, the tall one with the picture of a dove, its wings opened wide, and blood-red flames of fire spreading out from its white body, in all directions, and beneath it the Latin words, “Espíritu Santo” (Holy Spirit). I had grabbed it when we left the house that night. For some reason it reminded me of El Santuario, the sacred shrine in Chimayo, New Mexico, where Chuck and I had visited last summer—it was the kind of old-fashioned candle you would find there. And while we were driving to Patchogue, I was thinking of El Santuario and the Mexican people who were praying in the chapel, and the giggling children who were dipping their feet in the little stream that runs through the shrine, and of how right before we left Chimayo that day, I stepped out of my dusty sandals and sat alongside them, with the other pilgrims, lowering my feet into the clear, cool water, a welcome relief from the heat of the noontime New Mexican sun. There were brown feet, white feet, black, old and young, like the rocks along the north shore beach near our home, multicolored and each one different, but together even more beautiful, sparkling where the sun touches them right beneath the water’s surface.

← "The Will": An Excerpt from 'Red Medicine,' a memoir in progress by Pat Gorman
Images from the Vigil for the Aniversary of Marcelo Lucero's Death →
"For Marcelo" by Susan Perretti