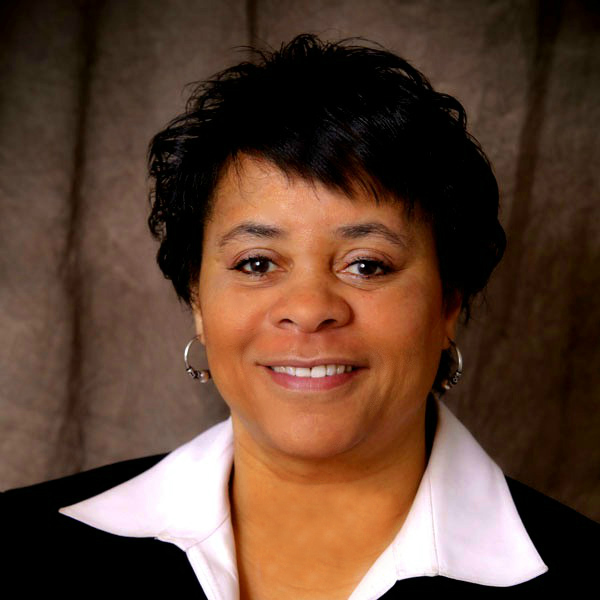 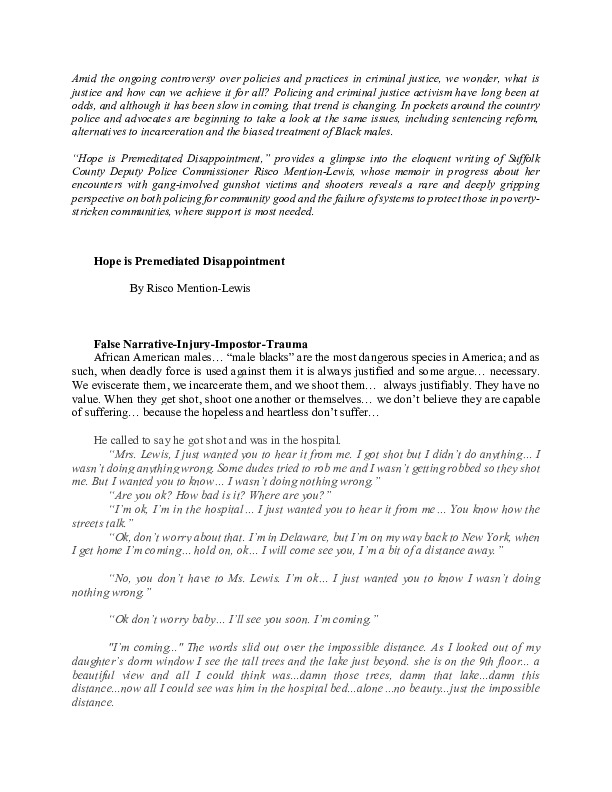 PDF version of "Hope is Premeditated Disappointment" by Risco Mendtion-Lewis

Amid the ongoing controversy over policies and practices in criminal justice, we wonder, what is justice and how can we achieve it for all? Policing and criminal justice activism have long been at odds, and although it has been slow in coming, that trend is changing. In pockets around the country police and advocates are beginning to take a look at the same issues, including sentencing reform, alternatives to incarceration and the biased treatment of Black males.

“Hope is Premeditated Disappointment,” provides a glimpse into the eloquent writing of Suffolk County Deputy Police Commissioner Risco Mention-Lewis, whose memoir in progress about her encounters with gang-involved gunshot victims and shooters reveals a rare and deeply gripping perspective on both policing for community good and the failure of systems to protect those in poverty-stricken communities, where support is most needed.

African American males… “male blacks” are the most dangerous species in America; and as such, when deadly force is used against them it is always justified and some argue… necessary. We eviscerate them, we incarcerate them, and we shoot them…  always justifiably. They have no value. When they get shot, shoot one another or themselves… we don’t believe they are capable of suffering… because the hopeless and heartless don’t suffer…

He called to say he got shot and was in the hospital.

“I’m ok, I’m in the hospital… I just wanted you to hear it from me… You know how the streets talk.”

“No, you don’t have to Ms. Lewis. I’m ok… I just wanted you to know I wasn’t doing nothing wrong.”

"I’m coming..." The words slid out over the impossible distance. As I looked out of my daughter’s dorm window I see the tall trees and the lake just beyond. she is on the 9th floor... a beautiful view and all I could think was...damn those trees, damn that lake...damn this distance...now all I could see was him in the hospital bed...alone…no beauty...just the impossible distance.

As my husband dropped the family off, I didn’t even stay to help him and the kids unpack my eldest; who had just graduated from college. I quickly apologized to her and noted her concerned but understanding face as I jumped into the car and just as quickly arrived at the hospital.

There he was… under an assumed name; as the police often list gunshot victims. Although I’m not his biological family I get into see him because I am an Assistant District Attorney…and to him… I am family. I get into his room and he is laying there. His skin is grey and he has the facade of little concern on his face, but does show enough expression to let me know he is pleased to see me. I go in easy.

“Hey baby… are you alright?”

As I walk toward the bed… I’m trying to be calm, trying to keep an easy expression on my face; just a bit of a purse lipped smile. As I approach closer to the side of his hospital bed and put my hand on his heart I say… and ask

His expression changes… he looks away and then back again at me… his mask is gone. He says;

As I try to put my arms around him…  careful not to get too close to his stomach… careful not to bump the small clear plastic tube where the watery pale red blood from his stomach drained into… we cried. I cried for his pain and the knowledge that he was so very alone. He cried for all of the years he has suffered without allowing tears. We cried cleansing tears… breaching the miles and distance between us forever more.

I came to visit him again the next day and every day after that. One such day as I walked into his room with large pink fragrant Stargazer lilies from my garden he smiled at me and said…”Hey Mom.”

So he knows he is loved. He knows I value him. He knows I have hope for his future but does he?

During our weeks of conversations while he recovered… we talk of choices. We talk about how our character defines our destiny.

Weeks later… as I approach his doorway I overhear him…  while smelling the newest bouquet of stargazer lilies strong floral scent… heavy in the air.

So how have you been feeling?

What do you think about the guy that hurt you?

I’m not thinking about him?

Well… I heard you on the phone… are people calling you to do something?

Well what do you think?

I think I have no choice.

No I don’t Mom… if I do nothing… then everyone will think they can do anything to me… I’ll be prey. This is just the way it is for us...

Ms. Lewis I can’t be an electrician.

What do you mean you can’t be an electrician… you said you did well in school until you got arrested and had to drop out.

I went to the school… checked your grades…

Are you trying to get me to hope?

Those words slid out… unfolded and flapped its dark wings above the hospital bed, pushing aside almost all of the clean fresh floral scent… replacing it with that heavy smell of blood that often lingers behind after the bodies lay still… and the spirit has departed.

That’s when I heard the words…

I left the hospital, just a bit down but undeterred. I quickly went to the Electrical training school… I met with the head administrator…

So, you will let him back in school and give him his tools…

Great… thank you so much.

Months later after he was healed and long out of that hospital bed…I asked him to speak with me at a criminal Justice class.

As he stood before the class and spoke of his journey… of losing his brother at 11, of losing his mother last year…  of wishing she could see him right now as an electrician assistant… of being shot.

He spoke of hope...a bit nervous but sure…

I used to believe hope was premeditated disappointment. I used to think my life couldn’t be any better than it was. I used to think… why try… don’t try to climb the ladder… if you do you will just fall.

Now I know… climb… and if you fall… you won’t fall to the bottom… and if you do… just get up and climb again.

← "The Visit" by Victoria Roberts
"Poverty’s Phoenix": An Excerpt from a Memoir by Shanequa Levin →
"Hope is Premediated Disappointment" by Risco Mention-Lewis