"I Was the Intruder" by Andreia Lee 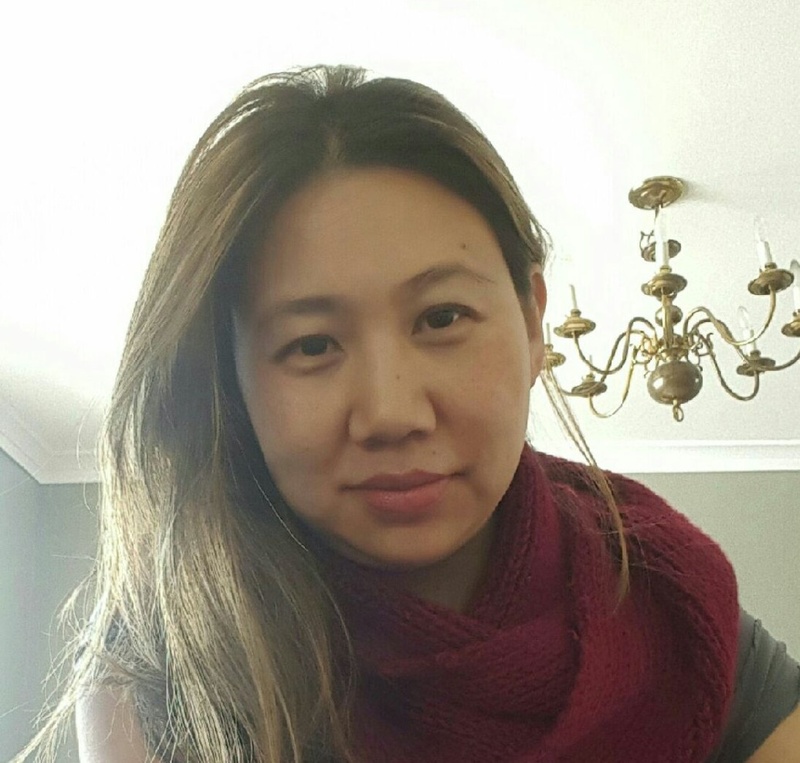 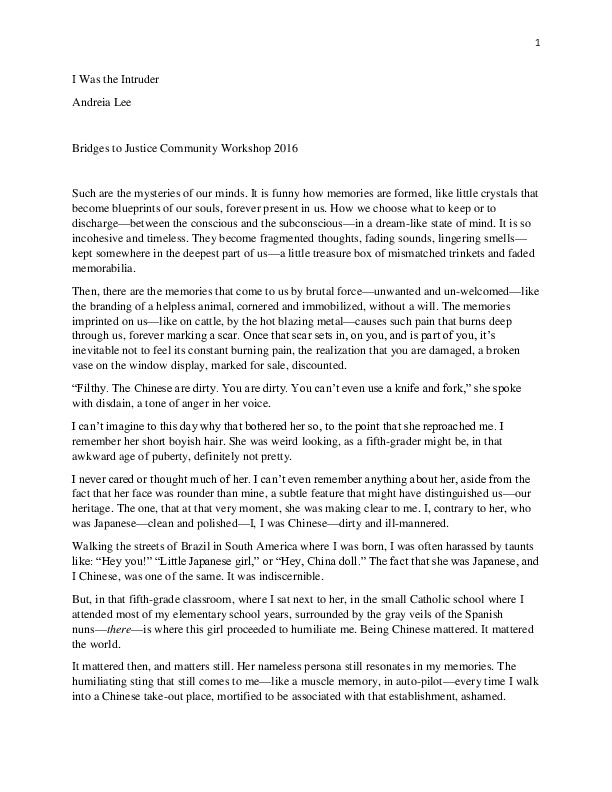 PDF version of "I Was the Intruder" by Andreia Lee

Such are the mysteries of our minds. It is funny how memories are formed, like little crystals that become blueprints of our souls, forever present in us. How we choose what to keep or to discharge—between the conscious and the subconscious—in a dream-like state of mind. It is so incohesive and timeless. They become fragmented thoughts, fading sounds, lingering smells—kept somewhere in the deepest part of us—a little treasure box of mismatched trinkets and faded memorabilia.

Then, there are the memories that come to us by brutal force—unwanted and un-welcomed—like the branding of a helpless animal, cornered and immobilized, without a will. The memories imprinted on us—like on cattle, by the hot blazing metal—causes such pain that burns deep through us, forever marking a scar. Once that scar sets in, on you, and is part of you, it’s inevitable not to feel its constant burning pain, the realization that you are damaged, a broken vase on the window display, marked for sale, discounted.

I can’t imagine to this day why that bothered her so, to the point that she reproached me. I remember her short boyish hair. She was weird looking, as a fifth-grader might be, in that awkward age of puberty, definitely not pretty.

I never cared or thought much of her. I can’t even remember anything about her, aside from the fact that her face was rounder than mine, a subtle feature that might have distinguished us—our heritage. The one, that at that very moment, she was making clear to me. I, contrary to her, who was Japanese—clean and polished—I, I was Chinese—dirty and ill-mannered.

Walking the streets of Brazil in South America where I was born, I was often harassed by taunts like: “Hey you!” “Little Japanese girl,” or “Hey, China doll.” The fact that she was Japanese, and I Chinese, was one of the same. It was indiscernible.

But, in that fifth-grade classroom, where I sat next to her, in the small Catholic school where I attended most of my elementary school years, surrounded by the gray veils of the Spanish nuns—there—is where this girl proceeded to humiliate me. Being Chinese mattered. It mattered the world.

It mattered then, and matters still. Her nameless persona still resonates in my memories. The humiliating sting that still comes to me—like a muscle memory, in auto-pilot—every time I walk into a Chinese take-out place, mortified to be associated with that establishment, ashamed.

Neglect comes in many shades: pale, dirty, unpainted walls chipped and covered with a thin film of dust; ripped plastic table cloths topped with grease; the cluttered corners of unopened boxes; and plastic bags. The Chinese take-out place on the corner of my house on Broadway does bring an uneasy familiarity to my grandfather’s Chinese restaurant in downtown Tokyo.

As irony prevails, what that hateful girl from fifth-grade, who proceeded to insult me, didn’t know, is that my mother was actually raised in Japan. That I had spent many summer vacations in Japan, and even had lived there for a short period of time. That I, like her, have belonged to her Japanese customs: the high cleanness and over-polished politeness included. I should have said something to her.

I should have told her. But I just sat there, quiet, taking in her words, allowing them in, making them real. I didn’t tell her about my school days in Japan when we took off our shoes to come in, and how clean we were.

My voice never comes to my defense. It shuts me out. It fails me. It is ashamed.

I often find myself in this state of paralysis: fear alone, that pure sensation that immobilizes you, takes your reason and your senses away, the quiet jet of adrenaline tingling through, making its way to your veins, covering your entire body in stillness.

I am as vulnerable and exposed as a baby whose only defense is its crying voice, but knowing no one will hear. It is left completely defenseless.

I am rendered powerless… POWERLESS. A lost power that has been taken from me long ago, from as early as I can remember. My first memory: sitting up in a crib, in a room of concrete walls, motionless and alone, except for the nearby rat, glancing over at me, with the hungry stare of a scavenger. There, too, I was powerless.

Just like so many other families that have chosen the path of migration: the early years of struggle and sacrifice, the harsh adaptation to a new country, the scarce resources and scraping every penny together just to risk it all away in the promise of a dream of a better life. Just like that, like so many before, and so many after, my parents made the journey.

They migrated from Japan and China to Brazil in the early 1970s. When they first arrived in that vast country of lush green and crystal blue oceans, they settled in a small neighborhood on the outskirts of Sao Paulo’s wider metropolitan area.

A quiet town of simple working men and women—many of them of a lower middle-class population—Vila Prudente was a calm place, with not many commercial opportunities for entrepreneurship. My mother always complained of that initial location as less than ideal for a family that had traveled so far in search of a new life. But led by my father’s inexperience and naiveté, and by the suggestion of an unreliable friend, that is where they settled and so spent their initial years in Brazil. There, on November of 1975, I was born and spent the first six years of my life, and is where my memories begin.

They ran a small mini-market: two cash registers, a few rows of basic groceries, candies, beverages, the essential household items you might find at a convenience store. The store’s two wide entrances faced the quiet neighborhood’s park, where I spent many hours playing, climbing trees and running around. To the left of the store, there was a padaria, a bakery and deli all in one. Across from it, there was a newspaper stand, owned by the parents of my childhood best friend. Her name was Adriana, and we spent endless hours playing teacher, hiding in the neighbor’s vegetable garden and causing some sort of mischief or another.

We lived behind our store. The back door led to an outdoor yard enclosed by tall walls topped with colorful broken glasses, where bags of rice and other goods where stored. Around the yard, three rooms stood apart and became our living quarters. There was nothing to these rooms but plain concrete walls and unfinished floors, more suitable and built for storage spaces than for anyone’s home. That is where we lived.

The first room connected directly to the store, had a bathroom, and was our eating area. The stove and sink were outdoors in the patio. The next room, a little higher on the uneven ground, was our bedroom. It had four twin-size beds, lined up on a row side-by-side, close together as to fit, one for each of us: my father, my mother, my brother, and me.

A few dressers and a chair or two, a couch, perhaps, is, really, all I can remember. Though details escape me now, what I can never forget is the ugliness, the lack of any warmth and comfort of this first home. I remember the black lock on the door, not one you would find in a bedroom, but a heavy metal one used to keep intruders out. And the feeling, always, that feeling that has been with me since then, and throughout, my adulthood, in all my struggles and failures, that haunting feeling of helplessness.

My mother said in later years, more than once, that after having me, she didn’t want any more kids. Enslaved to working and void of any joyful motherhood moments, she spoke of how she agonized, daily, as she would put me down for naps at the back of the store, past all the shelves of dry food, cans and beverages, past the concrete yard, far enough from her, where she couldn’t hear if I cried.

I guess it never occurred to her to leave me in a bassinet alongside her at the cash register where she tended to customers at the store. Or maybe that was just not an option. I am sure she didn’t have any of the modern conveniences we enjoy as mothers today. An audio monitor would have easily solved her agony, but not on those days.

So there I was, often left at the mercy of rodents and all other creepy crawlers that found their ways through the cracked ceilings of our bedroom. There—with that haunting memory of a rat staring at me—I sat, petrified, waiting in horror, helpless.

In the growing years, I used to often look under the beds with fear, before I would allow myself to set foot on the floor. Though, a faded memory now, the image of that rat has remained with me. In my later years, in the streets I walked, in the subways of the big cities, the train rides in New York, it has always been present—peeking its head out from the filth and the decay I passed by.

I wonder now, how many more places has it shown its face, creeping through sewers and landfills of garbage, claiming its territory in the slums, and the poorest homes of the destitute? How many more children who were left abandoned, neglected, and forsaken in a place where no one would hear their crying voices, has this creature frightened, haunted, and co-lived with? For, yes, it belonged to it, my makeshift bedroom, behind my parents’ first attempt of making a living in a new foreign country. It was indeed its home, the rightful place of a scavenger to find shelter, food and comfort. It was not my place to be. I was the intruder.