"Say His Name" by Amber Davis 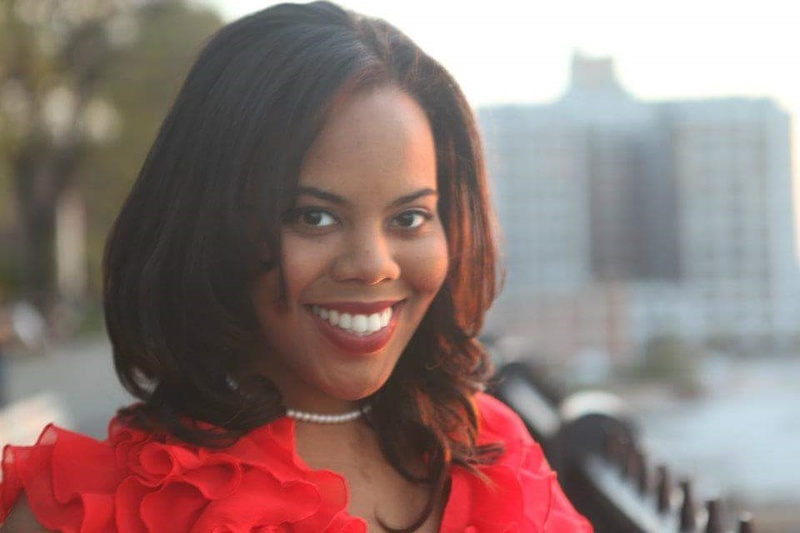 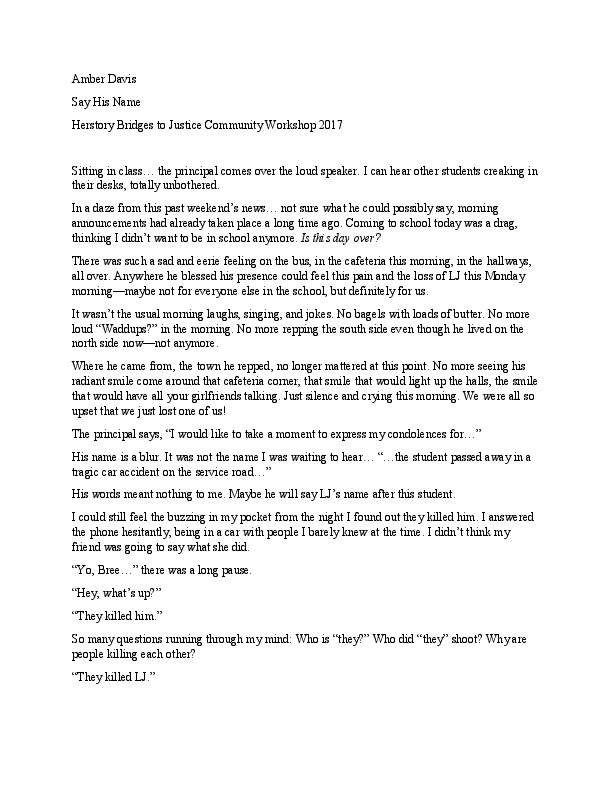 Sitting in class… the principal comes over the loud speaker. I can hear other students creaking in their desks, totally unbothered.

In a daze from this past weekend’s news… not sure what he could possibly say, morning announcements had already taken place a long time ago. Coming to school today was a drag, thinking I didn’t want to be in school anymore. Is this day over?

There was such a sad and eerie feeling on the bus, in the cafeteria this morning, in the hallways, all over. Anywhere he blessed his presence could feel this pain and the loss of LJ this Monday morning—maybe not for everyone else in the school, but definitely for us.

It wasn’t the usual morning laughs, singing, and jokes. No bagels with loads of butter. No more loud “Waddups?” in the morning. No more repping the south side even though he lived on the north side now—not anymore.

Where he came from, the town he repped, no longer mattered at this point. No more seeing his radiant smile come around that cafeteria corner, that smile that would light up the halls, the smile that would have all your girlfriends talking. Just silence and crying this morning. We were all so upset that we just lost one of us!

The principal says, “I would like to take a moment to express my condolences for…”

His name is a blur. It was not the name I was waiting to hear… “…the student passed away in a tragic car accident on the service road…”

His words meant nothing to me. Maybe he will say LJ’s name after this student.

I could still feel the buzzing in my pocket from the night I found out they killed him. I answered the phone hesitantly, being in a car with people I barely knew at the time. I didn’t think my friend was going to say what she did.

So many questions running through my mind: Who is “they?” Who did “they” shoot? Why are people killing each other?

I was in complete shock at what she said, in utter disbelief that someone could kill a sweet, funny young man, with such a strong heart and soul. I answered, “Wait… What?! Who?! Why?!”

He was at a party and they started shooting. LJ was hit. They tried to take him to the hospital but he still didn’t make it.

Still reliving that call and listening to the loud speaker… I thought to myself: Who is this student? I’ve never even heard of him. Listening for an “and…” or “also…,” some preposition to know LJ’s name was next.

The principal continues: “We express our deepest condolences to anyone this student may have known and to his friends and family. Thank you.”

Class resumes as normal, as if no one heard what I heard sitting in class filled with honor students. Of course they didn’t hear what I just heard. Thinking… Nah, he’s joking, right? The audacity of this man to not even say his name.

He should have been the first name. He should have been the only name. That student didn’t even go to this school, or maybe he did, it doesn’t matter, it’s sad that he is no longer with us, but LJ is gone forever, too. I am sure they knew. I am sure they seen us all crying in the cafeteria. Maybe they didn’t. Maybe that’s the problem: they don’t see us!

Just another black man shot, just another black man lying in the street, shot by his peers who just came out that night to have a good time. What constitutes a good time? Running for your life after you were crammed in someone’s basement, after receiving that dance you was waiting for, listening to the blaring music over a speaker, then getting into it with someone over something so small as they were pushed, or someone stepped on their Jordans? That didn’t have to be the last party LJ went to, that didn’t have to be the only name I just heard on the loud speaker.

A few more periods go by. The principal comes on the loud speaker again… “I do apologize. There was another tragic death this past weekend: that of Jerome Hamilton. I take this time to send condolences to his family and friends.”

Someone must have said something. Someone must have spoken up and went to the office. I don’t know who, but God bless their soul, their bravery to challenge the administration and tell them they forgot about one of us! They need to know we deserve acknowledgment just like the rest of them.

We have to speak up!