"The Age of Legality" by Kris Janvier 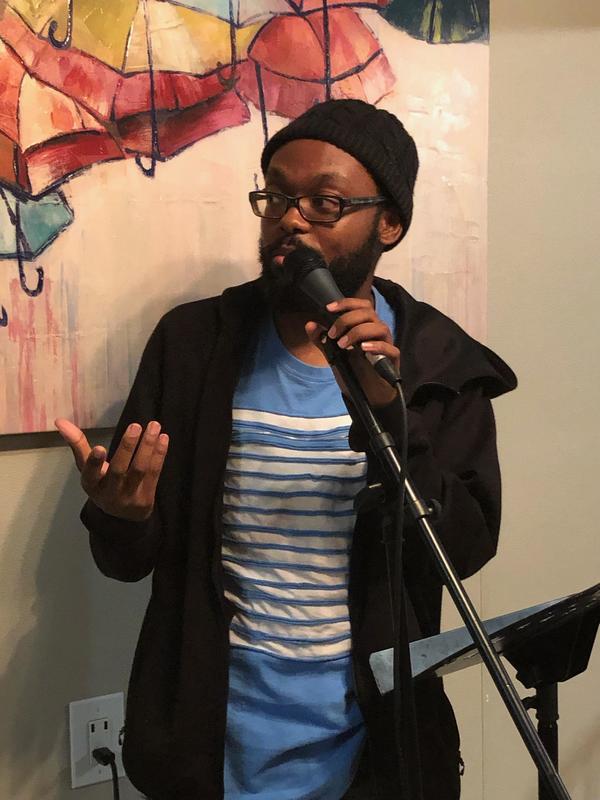 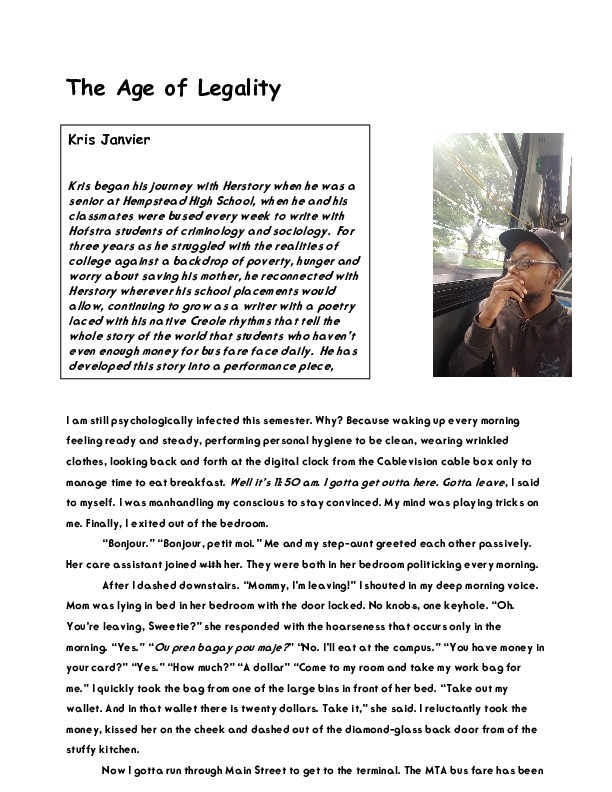 PDF version of "The Age of Legality" by Kris Janvier

I am still psychologically infected this semester. Why? Because waking up every morning feeling ready and steady, performing personal hygiene to be clean, wearing wrinkled clothes, looking back and forth at the digital clock from the Cablevision cable box only to manage time to eat breakfast. Well it’s 11:50 am. I gotta get outta here. Gotta leave, I said to myself. I was manhandling my conscious to stay convinced. My mind was playing tricks on me. Finally, I exited out of the bedroom.

“Bonjour.” “Bonjour, petit moi.” Me and my step-aunt greeted each other passively. Her care assistant joined with her. They were both in her bedroom politicking every morning.

After I dashed downstairs. “Mommy, I’m leaving!” I shouted in my deep morning voice. Mom was lying in bed in her bedroom with the door locked. No knobs, one keyhole. “Oh. You’re leaving, Sweetie?” she responded with the hoarseness that occurs only in the morning. “Yes.” “Ou pren bagay pou maje?” “No. I’ll eat at the campus.” “You have money in your card?” “Yes.” “How much?” “A dollar” “Come to my room and take my work bag for me.” I quickly took the bag from one of the large bins in front of her bed. “Take out my wallet. And in that wallet there is twenty dollars. Take it,” she said. I reluctantly took the money, kissed her on the cheek and dashed out of the diamond-glass back door from of the stuffy kitchen.

Now I gotta run through Main Street to get to the terminal. The MTA bus fare has been raised by 25 cents. The bus drivers are on the money now, I supposed. They used to be late on purpose. My legs are burning from all this running. Dehydration. Hunger. No money to buy food and a drink, but the card has been refilled. I find it hard to ask people for money. And I’m not trying to think about a job because I don’t want it to become a burden to my college education. Distress, I tell ya. Distress.

1One slide for $2.75 after surviving a long line of hopelessness and oppression and homelessness and famishedness. Hempstead, I will see you later in hopes that you treat people better and give the wheelchair man some money for a good recovery. He’s gonna need it. Sincerely yours, Kris. “You got some money for some coffee?” the wheelchair man asked with in a soft dying tone. I gazed at him staring at me and for the numerous time for… I don’t know how many months I’ve seen him, it’s been a while. For the umpteenth time I told him, “No, I don’t have any money on me.” I’m just like him, I wished I could tell him, but I was nervous. Nervous that he was going to do something to me on a felony level. Confusion on my part. It seems that he has boarded the bus — he has paid the fare — yet he is in dialogue with the wheelchair man, who I imagine is not on the bus.]

The bus door opened and I turned my head towards the Long Island bus. The line was moving slow. Nervousness transformed into anxiousness. Slow-ass passengers. I can still see the wheelchair man out of the side of my eye. Now he was staring at the other bus-waiters. Even they denied to serve him. I wasn’t worried about the other bums that are talking amongst each other. Bum stories, I’m listening. Frankly, I’m interested in them. Just not in the morning. Finally, I’m next. I quickly shifted inside the bus and inserted the Metro-card in the slot to scan it. Two seconds later, the card popped up and I looked over at the little red screen: 18-something dollars. That was all it had left. I was searching for seat, but everything was taken by these zombies. Even though there were open seats next to the windows, they would not let you through. I hated when they did that. I mean, what is so difficult for you to sit next to the window? I mean, you could’ve saved lives by leaving an open seat by the walkway. Anyway, each its own right? Spring had just begun and it was sunny but cold in Hempstead. Daylight Savings Time means less sleep for the common folk. Anxiousness turns to guilt. It’s embarrassing to worry about the seats when the wheelchair man and the bums are outside in the cold. We’re from the same ghetto. Black and oppressed under these flashy shoes of the system. It was just that I had the privilege that he lost. If only I had enough money—if only. And for the next half hour, the same thought occurred when I saw another bum sitting outside of the Hicksville train station.

The shuttle bus had arrived. Another bus ride and I am hungry as hell. Class was about to start and I’m contemplating whether I want to go to class or not. The stereo was blasting Power 105.1. The same songs are in rotation again. I checked the forums in my Galaxy just to be let down by a lack of new music rumors, and there are so many colleagues whispering. The psychological game had just begun. Newbridge, Broadway, North of Route 107. From Hicksville to Jericho to the edge of Brookville. The gate is on the left side, so why won’t you run the light? There is no cars around. Just turn left and we’re there, I thought eagerly. I just want the class to be over quick because there is a possibility that I could find that girl that gave me butterflies.

I hopped out of the shuttle bus and dashed down the pathway full of geese, hoping that I make it to class. These random thoughts are racing against me. My Polo boots. Cannot match its speed. It’s like I can see my thoughts drift behind each other, and they vanish in their tire smoke. My train of thought was long enough to tie up a human body. Why did I have these thoughts? Was it because of my mom’s expectations? I’ve been thinking too long and hard about these plans that my mom envisioned: Good school. Scholarships. More money. Good wife. Good career. Nice house. My motor license. Be a good Christian. Kids. The more I thought about it, the more apathetic I would be. That was one of the reasons why I’ve procrastinated a lot ever since I set foot on this campus. It was the fear of her going against what I know based on culture, religion, values, etc… I appreciate her lessons and I know she meant well for more than a decade trying to raise two kids. For more than a decade, she kept the love fresh with my stepfather, who rescued her from the house fire of agony, sadness, anger, anxiety, pain from back in the ’90s. I love both of them, but their disciplinary skills made me even more self-conscious and curious, and one day I am looking to rebel against their priorities. Everybody got their own judgement on the college boy: Me, the anomaly. I am that. Twenty-one. The age of legality. I should feel the need to drink, but I don’t feel like it. I never do. Maybe, after…  when Mom becomes an American citizen.

Kris began his journey with Herstory when he was a senior at Hempstead High School, when he and his classmates were bused every week to write with Hofstra students of criminology and sociology.  For three years as he struggled with the realities of college against a backdrop of poverty, hunger and worry about saving his mother, he reconnected with Herstory wherever his school placements would allow, continuing to grow as a writer with a poetry laced with his native Creole rhythms that tell the whole story of the world that students who haven’t even enough money for bus fare face daily.  He has developed this story into a performance piece.