"The Will": An Excerpt from 'Red Medicine,' a memoir in progress by Pat Gorman 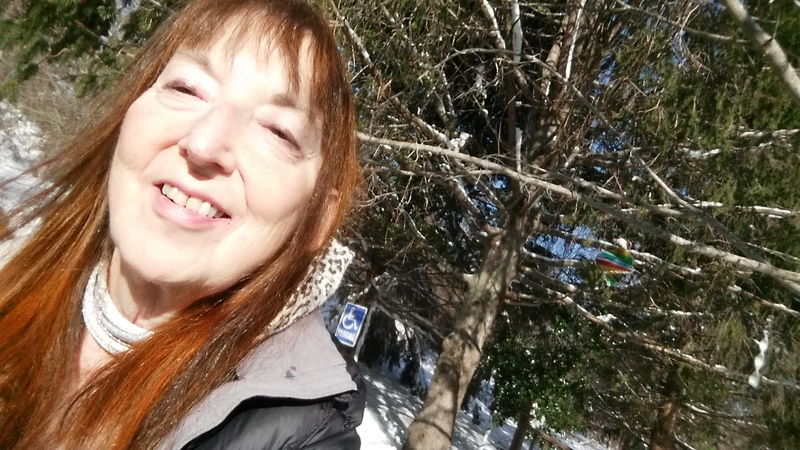 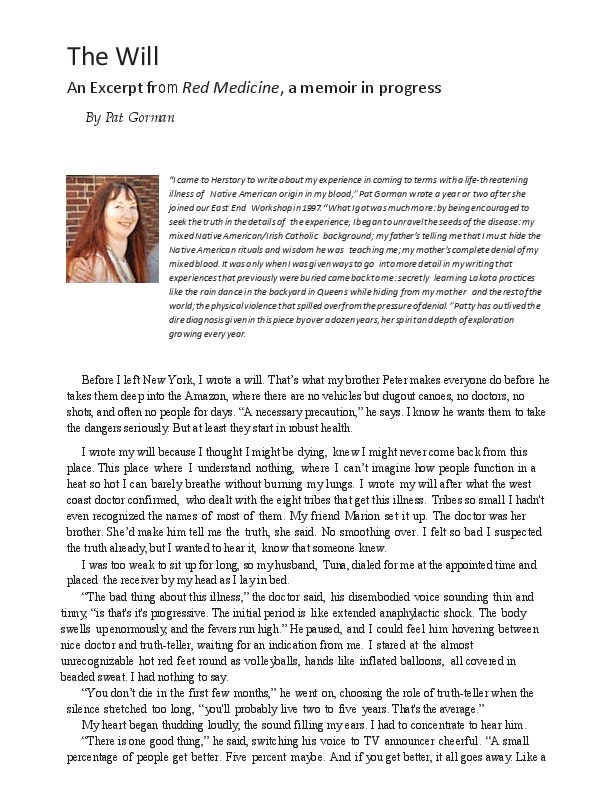 PDF of "The Will: An Excerpt from 'Red Medicine,' a memoir in progress" by Pat Gormar

Before I left New York, I wrote a will. That’s what my brother Peter makes everyone do before he takes them deep into the Amazon, where there are no vehicles but dugout canoes, no doctors, no shots, and often no people for days. “A necessary precaution,” he says. I know he wants them to take the dangers seriously. But at least they start in robust health.

I wrote my will because I thought I might be dying, knew I might never come back from this place. This place where I understand nothing, where I can’t imagine how people function in a heat so hot I can barely breathe without burning my lungs. I wrote my will after what the west coast doctor confirmed, who dealt with the eight tribes that get this illness. Tribes so small I hadn't even recognized the names of most of them. My friend Marion set it up. The doctor was her brother. She’d make him tell me the truth, she said. No smoothing over. I felt so bad I suspected the truth already, but I wanted to hear it, know that someone knew.

I was too weak to sit up for long, so my husband, Tuna, dialed for me at the appointed time and placed the receiver by my head as I lay in bed.

“The bad thing about this illness,” the doctor said, his disembodied voice sounding thin and tinny, “is that's it's progressive. The initial period is like extended anaphylactic shock. The body swells up enormously, and the fevers run high.” He paused, and I could feel him hovering between nice doctor and truth-teller, waiting for an indication from me. I stared at the almost unrecognizable hot red feet round as volleyballs, hands like inflated balloons, all covered in beaded sweat. I had nothing to say.

“You don’t die in the first few months,” he went on, choosing the role of truth-teller when the silence stretched too long, “you'll probably live two to five years. That's the average.”

My heart began thudding loudly, the sound filling my ears. I had to concentrate to hear him.

“There is one good thing,” he said, switching his voice to TV announcer cheerful. “A small percentage of people get better. Five percent maybe. And if you get better, it all goes away. Like a switch that turns off.”

I could almost see a mechanical smile on the other end of the line, three thousand miles away, holding out the shiny brass ring, just a bit too far out of range.

“How—how do I get to be one of those five percent?” I stammered out the words, reaching for wisdom.

“Oh, no one knows.” The tone was breezy, a bit dismissive.

“What?” I was confused. I pressed my head further into the phone, hoping that I’d hear something different if his voice was clearer.

“Well, there’s no reason to really follow these people. There aren’t many of them. It’s dying out as their blood becomes more diluted. As they intermarry more,” he added, as though I wouldn’t understand. “Besides, there’s nothing we can do for them.”

I realized with choking anger that his disregard was like the lie in my blood, the lie that says there is something wrong with the red cells that carry the Indian antigen, and the white immune system is conquering and killing them, an ironic analogy for the white culture wiping out the red, a kind of genocide locked within me. I lay there, one of the “them,” and heat rushed into my heart.

“Well, of course, there’s nothing you can do for them if you don't figure out what makes them better,” I said harshly. I was unforgiving. I’d had such hopes for this conversation, set up days in advance. At last someone who knew something. Now I felt tossed in the bin with my unknown relatives, an endangered species hunted to extinction.

The conversation ended abruptly. But the message stayed with me. I would probably die. Western doctors couldn’t help me. I was losing, slipping, being crushed somewhere deep. It was real. I knew then that I must take my chance and come down here, live with Don Lupe. Now. It couldn’t wait. And so I made my will. And gave away my possessions. In case I never came back.

The silk suits I wore to the UN as a consultant, the two-hundred-dollar-a-pair Arche shoes and boots I wore to meetings at MTV, the glittery clothes I wore to the Grammies, I threw into big black garbage bags and gave to my younger sister, Regina, who was almost as tall as I was. Maybe she could wear them while teaching in the Bronx. My special hydraulic acupuncture table, a gift from Tuna merely three months before, and meant to last for the rest of my career, went to a colleague along with my practice.

Finally, I wrote to all of my patients and said I wouldn’t be coming back, that I couldn’t help them anymore. As I did these things, I watched my life dissolve like salt in water, like the taste of tears. The few precious things I kept I put into a will with messages for each brother and sister, and Tuna. I lay in bed, seeing the items in my mind, cataloguing them.

I contemplated the Indian things, the things my father had given me. Who should have them. My brothers and sisters? A museum? I was the most Indian person left in my family, and that wasn't much at all. No one I gave them to would really understand their meaning, the things my father told me. And the little I knew would be gone when I went.

But they were valuable. When my parents died my sisters took a couple of small, worn baskets, damaged on their sides, things we used every day, to Sotheby’s. Sotheby’s went wild. These were Lakota, they said. Nobody had authentic Lakota items. The Lakota didn’t trade with the white man. They were priceless. Sotheby’s would be happy to auction them off for us. And they hadn't even seen the beads, the pipes, the rugs, the headdress. My sisters returned saddened. They’d hoped to learn something about themselves, I think. Not just a price. Just as my father had carried these things through his life, I’d carried some of these things with me through mine, through lofts, apartments and communes, college and jobs, boyfriends and travelling. When I’d open the boxes they were in, I’d be startled, as though I’d accidentally opened someone else’s belongings. Then I’d feel stabbed, pierced by the memory that they were part of me, a deep part of me, but that somehow I was not part of them.

Here were these objects, sacred and everyday, smelling of fires and food, sheened with the oils of many hands; but I was cut off from their secrets, their comforts, their people, my people. I wasn’t an Indian. Not really. Not anymore.

I’d stop breathing for a moment, then close the box quickly, push it away until I’d forget it was there, only to discover it another day with the same surprise and sadness.

I knew Tuna would find these things if I died. Give them back to my brothers and sisters, I said in the will, thinking at least these things would remind them of our father, even if in the same moment they were forgetting who we were.