"The Emptiness that we Carry in our Hearts" by Anonymous 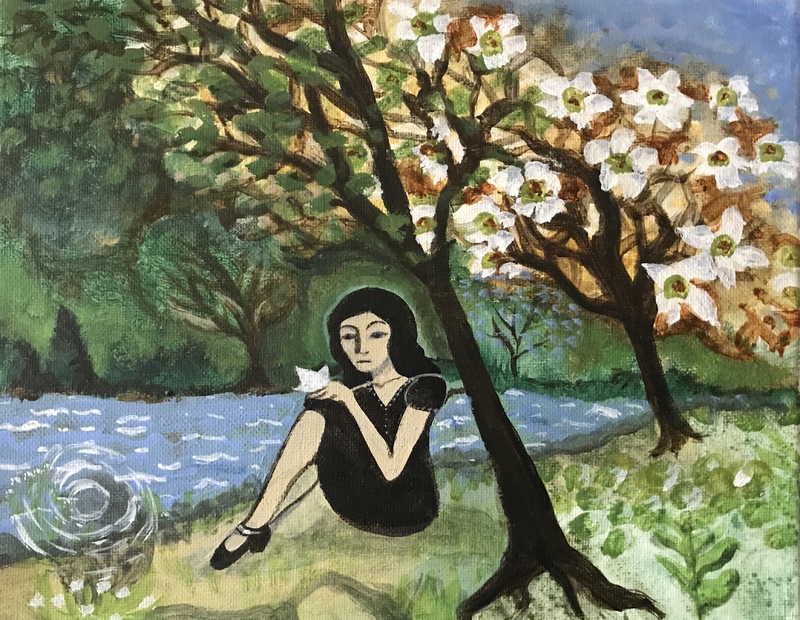 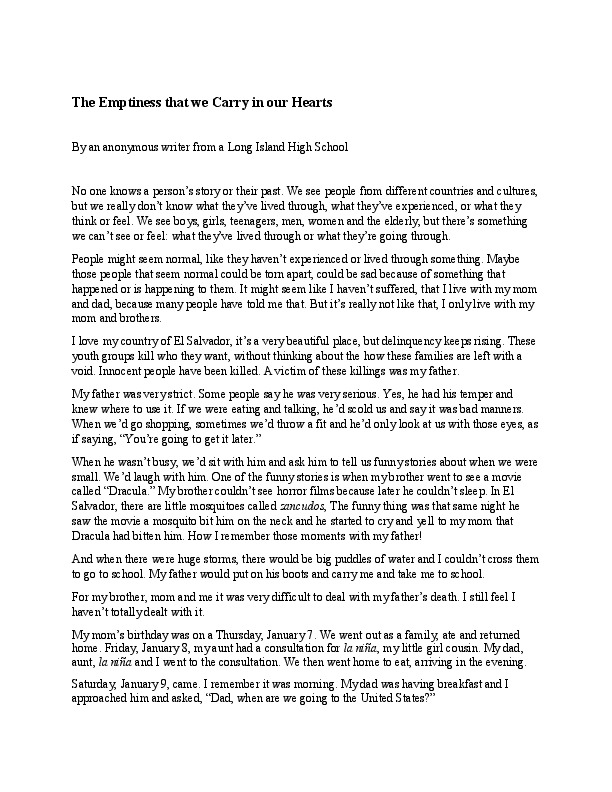 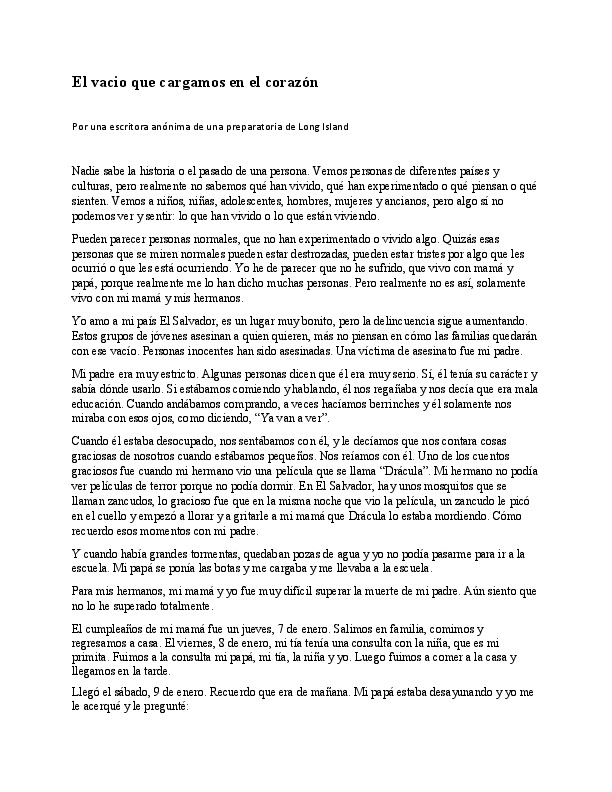 People might seem normal, like they haven’t experienced or lived through something. Maybe those people that seem normal could be torn apart, could be sad because of something that happened or is happening to them. It might seem like I haven’t suffered, that I live with my mom and dad, because many people have told me that. But it’s really not like that, I only live with my mom and brothers.

I love my country of El Salvador, it’s a very beautiful place, but delinquency keeps rising. These youth groups kill who they want, without thinking about the how these families are left with a void. Innocent people have been killed. A victim of these killings was my father.

My father was very strict. Some people say he was very serious. Yes, he had his temper and knew where to use it. If we were eating and talking, he’d scold us and say it was bad manners. When we’d go shopping, sometimes we’d throw a fit and he’d only look at us with those eyes, as if saying, “You’re going to get it later.”

When he wasn’t busy, we’d sit with him and ask him to tell us funny stories about when we were small. We’d laugh with him. One of the funny stories is when my brother went to see a movie called “Dracula.” My brother couldn’t see horror films because later he couldn’t sleep. In El Salvador, there are little mosquitoes called zancudos, The funny thing was that same night he saw the movie a mosquito bit him on the neck and he started to cry and yell to my mom that Dracula had bitten him. How I remember those moments with my father!

And when there were huge storms, there would be big puddles of water and I couldn’t cross them to go to school. My father would put on his boots and carry me and take me to school.

For my brother, mom and me it was very difficult to deal with my father’s death. I still feel I haven’t totally dealt with it.

My mom’s birthday was on a Thursday, January 7. We went out as a family, ate and returned home. Friday, January 8, my aunt had a consultation for la niña, my little girl cousin. My dad, aunt, la niña and I went to the consultation. We then went home to eat, arriving in the evening.

Saturday, January 9, came. I remember it was morning. My dad was having breakfast and I approached him and asked, “Dad, when are we going to the United States?”

He replied, “Why do you want to go? You’re fine here.”

“I want to see my brothers.”

He then got up from the table and went to the store.

My father was a construction worker; he built houses, doors and more. He came back with materials like steel, brick and cement, and also some things for the house, like food and more.

I remember very well the words he’d say to us: “Study, study, I don’t want you to suffer like I did.” I’ve safeguarded these words in my heart and it’s what I’ll do.

My father came back. It was time to go to church. We got in the car and arrived. We left the church and came home. All of a sudden, my dad’s phone rang. It was a man that wanted a favor, if my dad could pick him up and take him home. My dad was a very generous man, if he could, he’d do the favor. My dad said, “Yes, of course.”

It was already night and my dad hadn’t returned. Eight o’clock struck and he hadn’t appeared. My mom was very worried, she moved about in the living room, walked to the door and back to the table. I remember asking her, “Mom, what time is my dad coming?”

She said, “I already called him and he’s on his way.”

Later, I asked her the same question and she replied, “He’ll be here in five minutes.”

I was sitting at the table with the young woman who helped us in the house. It was eight-thirty. Suddenly, we heard shots, a lot of them. The bad men were already waiting for him. My mom, the young woman and I ran. My mom says she heard when my dad yelled, “No! No! No!” Truth is, I didn’t hear anything. We went outside and looked around, but I didn’t see him.

My mom saw him and cried out, “My love!”

I couldn’t believe what I was seeing. I ran to where my dad was lying and began to scream like mad, “Dad! Dad!”

My mom, completely unnerved, couldn’t make a call, her hands were shaking. The young woman who helped us also cried out, “Mr. Armando, don’t leave us, you are strong, we need you… Mr. Armando, your children are here, and your wife, Miss Patty…”

My little brother was sleeping. I ran to his room with the young woman and told him, “Ariel, they shot Dad!”

The police came and took him away. With him went my mom. My dad used glasses, they took them off—there were drops of blood on them. That night turned the darkest night ever for me. More police came and they started to investigate and put up yellow tape around the murder scene.

The young woman, brother and I kneeled and prayed. I cried non-stop and asked, God, don’t take my dad, please.

The young woman’s phone rang and my mom told her my dad had died. No one in the neighborhood could believe it, people were saying, “Don Armando was a good person, why?!”

After what happened, you didn’t see kids playing in the streets anymore. At 6:00 p.m. people were already locked in their homes.

They’d say to us, “Go get some sleep, lock yourselves in.” I couldn’t sleep. I got up and suddenly I heard there was knocking on the door. It was my grandma, my dad’s mother. She arrived looking terrible and asked if we were alright. “Lock the doors tight,” my grandma said.

Minutes later, there’s another knock at the door. This time it was my grandpa, my dad’s father. My grandpa was also looking terrible, and I remember him saying, “What have they done to my son?”

My grandpa hugged us and left very sad. My uncle Juan sent police to guard us. My uncle was a chief and subinspector of the National Civil Police)

We went to bed. From the fear and anxiety that we felt, we slept together in the same bed: the young woman, my brother and me.

The next day, I got up very early. People started arriving and saying they were sorry and couldn’t believe it. But that didn’t console me. The only thing that consoled me was God.

Later the people from the funeral home arrived, my dad was coming. You know? I couldn’t believe it. Yesterday I saw him about and smiling and now I see him in a coffin, I thought in disbelief of what was happening. I fell to the ground unconscious. Many people told me how, when I fell, I lost all color and was really cold.

I remember hearing in the distance my mom’s voice, so soft, words without strength, in the words you heard the sadness, I heard a little voice that said to me, Jenny, Jenny, wake up, daughter. That’s all I remember, what other people were saying, I couldn’t hear.

I dressed in black, because my heart was in mourning. The afternoon came and many people started to arrive. It was a lot of people that didn’t fit inside and there were people outside. I didn’t go, I went to the back of the house to distract myself with the women preparing coffee and tamales. I started to help, but I couldn’t help. I felt terrible.

There was a friend with me who said, “Come on, you can’t be here, you’re hurting yourself.”

“Leave me,” I said, feeling anger and sadness.

I told myself, Jenny, be strong, you can do it.

I gave of myself until I couldn’t any more. I went to help give out the coffee and tamales, but felt I couldn’t do it, the ambiance was so sad. I saw my teachers and they hugged me. I ran out to the dining room and began to say in my mind, Dad, Dad, why my Dad? I fell asleep at the table, I was tired, I hadn’t slept well the night before.

I woke up scared, thinking it was all a nightmare, but it wasn’t so. Around me there was no one, only solitude. My brother had already gone to sleep.

Suddenly, I began to hear sobbing and lamenting. It was my grandma who was behind the house. She was in a terrible, terrible state. She was sitting on a chair and with her was my mother who, with the little strength she had, wafted alcohol on my grandma’s nose because she’d faint. There were other women fanning her.

I couldn’t stand it. I ran out, looked behind me and saw my dad’s coffin, surrounded by pretty flowers. I only remembered that when I was little, when I’d cut the prettiest flowers in the garden, I’d run in saying, “One flower for my mom and one for my dad.” My dad would put the flower behind his ear and make me laugh, and put the other flower in my mom’s hair.

I sighed, approached him and began to talk to him. I couldn’t cry anymore, felt I didn’t have any more tears in my eyes, I’d run out. But my deep pain continued inside me.

The young woman who helped us said to me, “Let’s go to sleep.”

Lying in bed, I looked up and then turned my head towards the window and saw the sky without stars; it was dark, sad just like me. I fell asleep.

I woke up the next day and got ready. I sat once again at the table and remembered when my dad sat at the table and told us funny stories. Suddenly, my grandpa arrived. He wanted to give me strength.