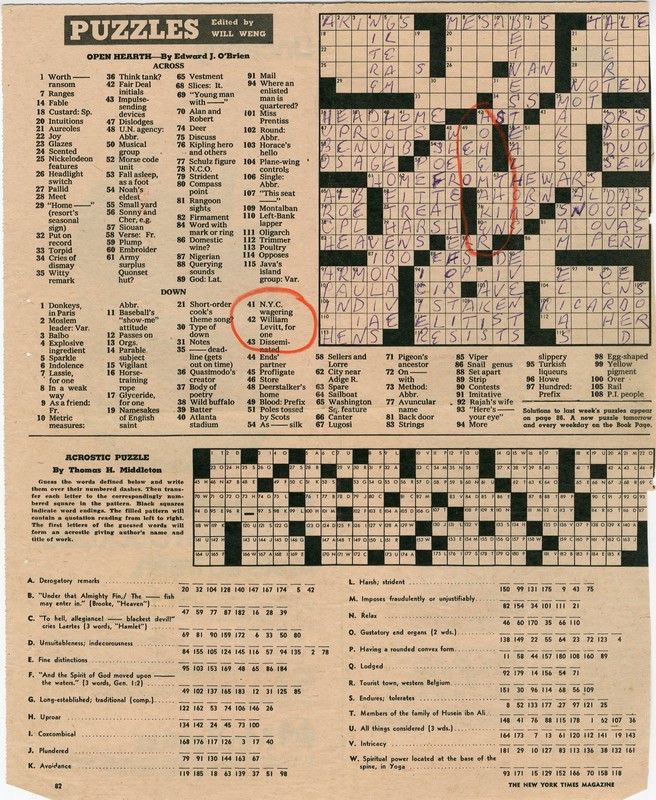 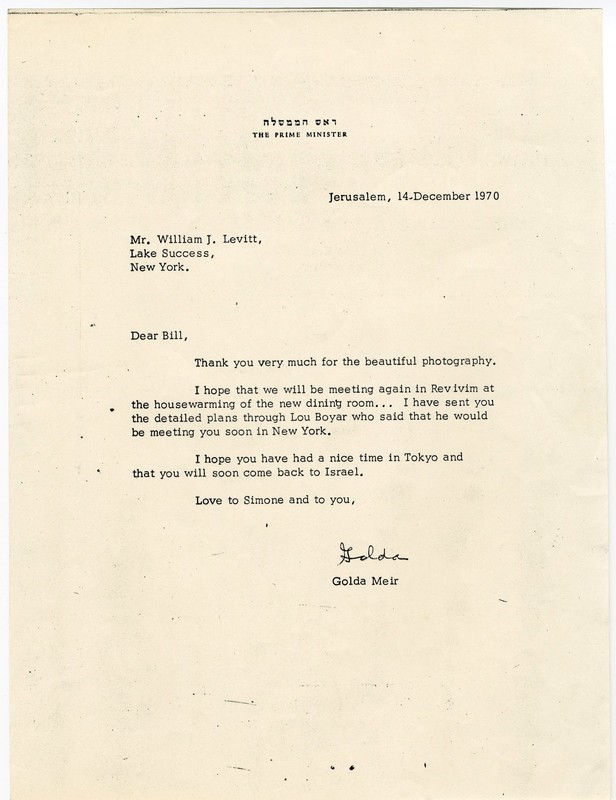 Personal letter of thanks from Golda Meir, the prime minister of Israel, to William Levitt.

After the success of Levittown, Levitt & Sons planned to construct a new and even better community on Long Island, implementing the lessons they learned from criticism of Levittown. A 1,750 home, organically-planned community that included residential, commercial, and industrial districts was designed. However, the Korean War Emergency declared by the Truman administration in 1951 precluded new residential construction outside of national defense districts and the project never got off the ground.

Levitt & Sons would instead build a new Levittown in Bucks County, PA, in 1951. Other “Levittowns” were erected in New Jersey and Maryland.

William Levitt took control of Levitt & Sons in 1954 after splitting with his brother, Alfred.  Abraham Levitt died in 1962 and Alfred died in 1966.

Under William’s control, Levitt & Sons would develop other communities abroad in Puerto Rico and France. By the late 1960s, Levitt was one of the richest men in America with a fortune exceeding $100 million. He lived in a lavish home called “La Coline” in Mill Neck, NY, with his third wife, Simone.

Levitt sold the company to IT&T in 1967, but remained on in an honorary position. IT&T was forced to divest the company due to antitrust action by the government in 1971, but failing profits made selling the company problematic. Levitt entered negotiations to rebuy the company he helped found, but they ultimately failed.

William Levitt founded a new company and built developments in Florida and Virginia, but was legally prohibited from using his name or Levitt & Sons’ history of success as selling points. Financial problems plagued some of these new developments and Levitt’s personal fortune was gravely impacted. He was accused of misappropriation of funds and had to sell off much of his personal belongings to satisfy his debtors. Levitt died on January 28, 1994.

Levittown itself remains a vibrant community. Many of its original identical homes have long since been expanded, renovated, and rebuilt, and few resemble their original appearances—much as Alfred Levitt intended.