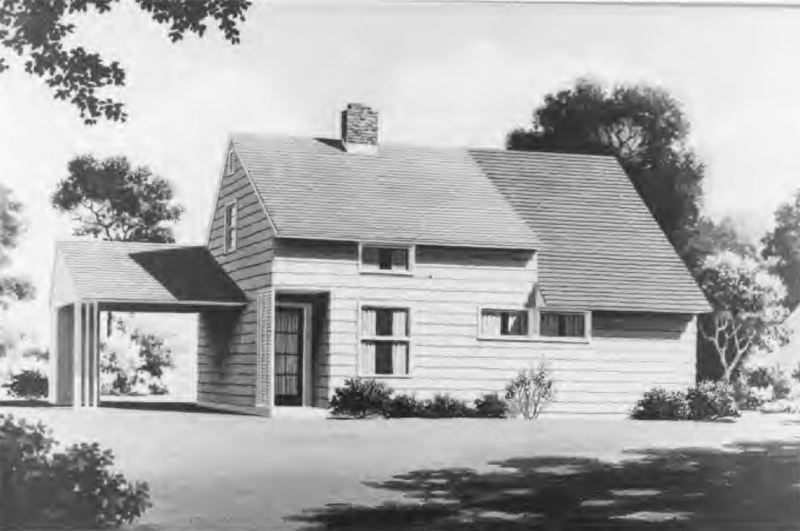 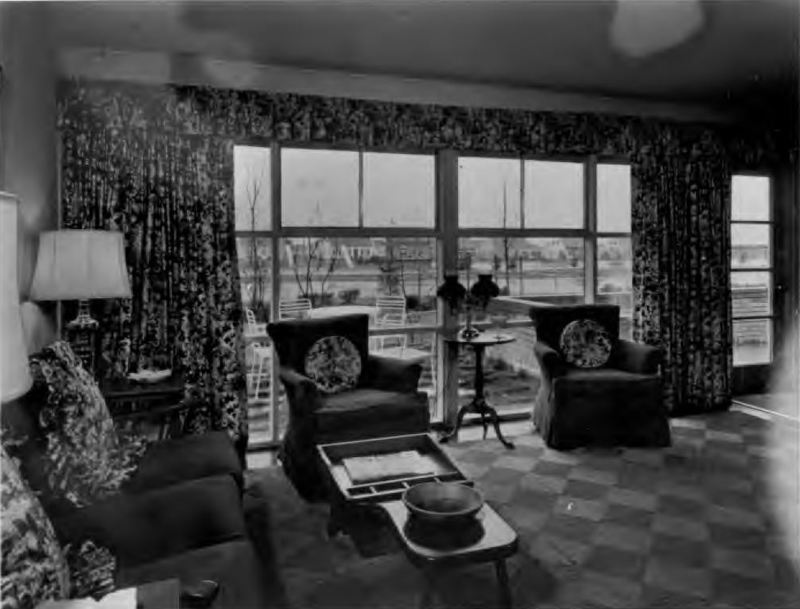 Photograph of the decorated and furnished interior of a model house in the Levitt development.

The Levitt houses were designed by Alfred Levitt, inspired by the work of Frank Lloyd Wright. In the 1930s, Wright conceived of a basic American low-cost dwelling he called the Usonian House. Levitt would incorporate many Usonian features in his own design a decade later.

The house was built atop a concrete slab with embedded heating pipes instead of a costlier excavated basement.  Built-in shelving and storage furniture made best use of the available space in the home’s small square footage, and the public living area was designed with an open floor plan. Lastly, all interior trim was eliminated. A fireplace allowed for both comfort and style.

Wright believed that these and other Usonian features, combined with pre-fab components, resulted in a home every family could initially afford. Then, as income and circumstances changed, the house could be modified to meet new demands and desires. The Levitt home fulfilled the promises of the Usonian House.

The Levitt House changed its design each year, mimicking that of automobile manufacturers. The first design was in the Cape Cod style, a style that Alfred declared to be “the most efficient house ever developed in America.” The 1949 model was radically restyled under pressure from the Federal Housing Administration, who deemed the Cape Cod model had saturated the marketplace.

The new ranch model moved the living room to the rear of the house, but retained the kitchen at the front of the home. The front-of-the-home kitchen was intended as a convenience for the mother, allowing her to keep an eye on children playing in the front yard and reducing the distance groceries had to be carried into the house. It had the additional benefit of reducing the length—and therefore the cost—of sewer pipes connected to the street.

The rear living room featured a Thermopane window wall overlooking the backyard, and an innovative moveable room divider. The fireplace was situated between the kitchen and living room, and included an indoor barbeque grill.

The 1949 model was well-received and the subsequent 1950 and 1951 models were similar in design, but included new features such as a built-in television set.