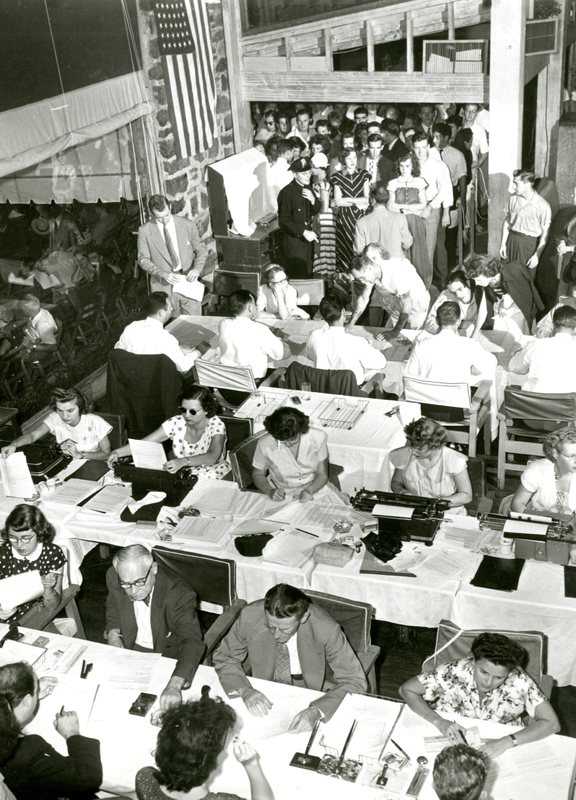 A photograph of people signing rental and homeowner contracts for homes in Levittown, NY on August 18, 1949.

On October 1st, 1947, the first 300 families moved into the nascent community of what was then called “Island Trees.” The overwhelming interest in the new community took everyone, including the Levitts, by surprise. Levitt & Sons originally planned to construct 2,000 houses. In the first few weeks of the initial offering, however, more than 8,000 families were turned away. The Levitts responded to the demand by acquiring more land, buying up adjacent properties and swelling the size of the community.

The Levitt homes were initially offered on a rental basis, with monthly rents of $60. Beginning in 1948, after the first residents’ leases were up for renewal, Levitt & Sons began offering homes for sale, choosing to divest themselves of rental properties and the obligations that accompanied them. The Levitts, especially Abraham Levitt, were involved landlords. It wasn’t unknown for renters to receive a visit from the Levitts if they let their lawns grow too tall or failed to keep their homes’ exteriors tidy. Abraham even changed the landscape of the rental units, swapping trees out with new ones if he felt the current landscaping wasn’t aesthetically pleasing.

Shortly after the initial residents moved into the community, William Levitt announced plans to rename the neighborhood to “Levittown.” Some residents balked at the idea, and one wrote to the local paper to declare “If Mr. Levitt’s name had been Schmollenhoffer or McGillicuddy—or such—would he affix the name ‘town’ to either and expect three cheers from tenants?”

Despite resistance, as principle landowner, William Levitt managed to change the name in 1948 and Levittown was born. The appellation “Island Trees” survives as the designation of a school district and a water district.