"Your World of Tomorrow" inside the Perisphere 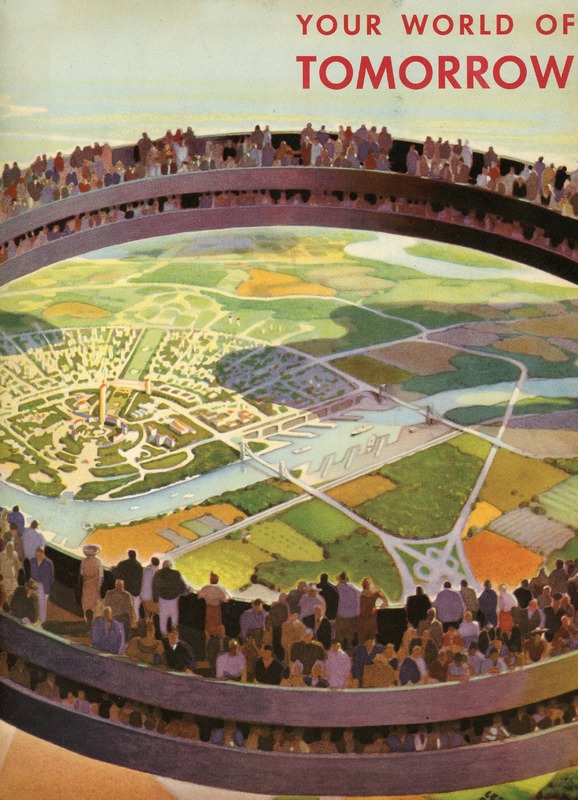 With the onset of World War II, the 1939 World's Fair took on the unofficial role of promoting messeges of peace through international cooperation and technolocial innovation. An optimistic and exciting example of "The World of Tomorrow," the pictured booklet describes the diorama inside the Perisphere titled "Democracity," a utopian and modern city of the future. This extremely popular exhibit was viewed from above on a moving sidewalk.

"Democracity" embodied the theme of the fair and the "Dawn of a New Day." The futuristic city was comprised of 6 zones, each with a unique purpose and relationship to the others. Zone A, in the center, was appropriately called "Centerton," and was the location for business, higher education, and government. Zone B was "Pleasantville," which was made up of residential towns within 60 miles of Centerton, each with a population of about 10,000 people. Beyond that in Zone C was "Millville," the industrial towns, which service the people in Centerton and Pleasantville with products from its factories. Zone D was "Terminus," the transportation hub for Democracity.  Zone E was comprised of the dam in the river which flowed through the city, a convenient source of electrical power for the entire region. Finally, Zone F contained farms, which provided agricultural products to all citizens.