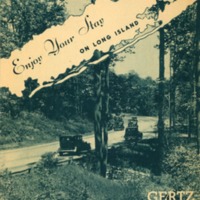 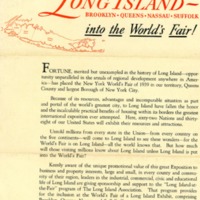 Often overshadowed by the famous island of Manhattan, Long Island was in a unique position in 1939, in that it played host to the World's Fair and its overwhelming number of patrons. Above right is a pamphlet that promotes the "Long-Island-at-the-Fair" program of the Long Island Association. It’s goal was to include a Long Island exhibit at the fair itself, in order to display the history and culture of Brooklyn, Queens, Nassau, and Suffolk Counties.

Above left is a pamphlet distributed by the now defunct Gertz Department Stores of B. Gertz and Co. It contains Long Island history and landmarks for visitors who stayed on Long Island to visit the fair.