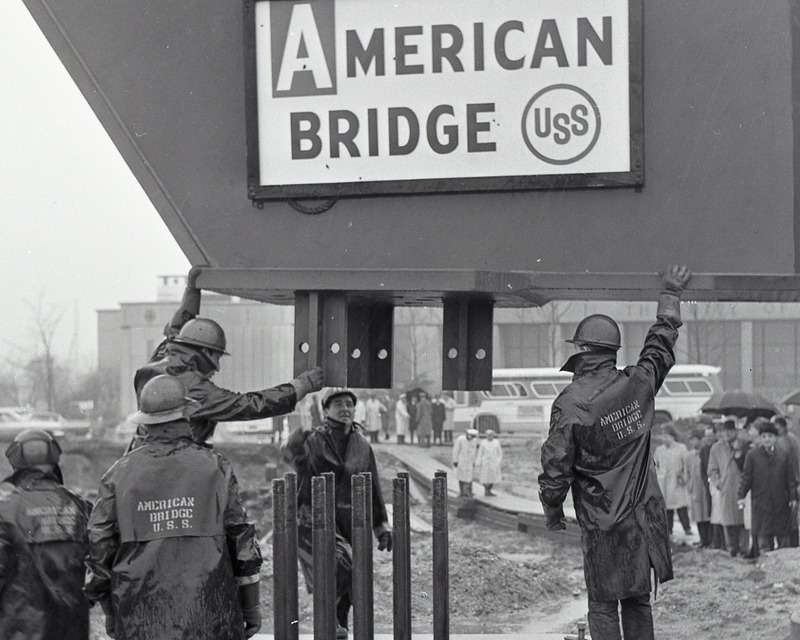 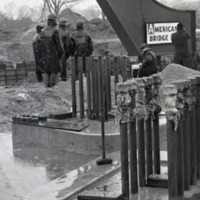 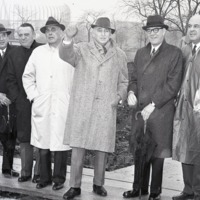 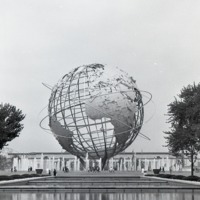 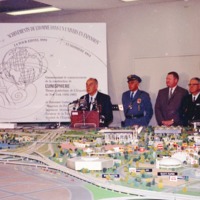 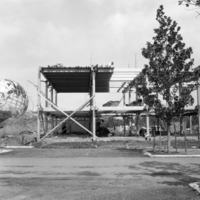 Called the "Miracle in the Meadow" and a symbol of the Fair's motto "Peace Through Understanding," the Unisphere became synonymous with the Space Age and the 1964 World's Fair. Donated as the United States Steel Corporation's exhibit and designed by Gilmore D. Clarke, the 12-story high, 900,000 pound structure was and still is the largest representation of the globe ever made.

Each pedestal for the fair weighed over twenty tons and was lowered onto pylons drilled into cement on the fairgrounds (seen in the large photograph above and top left). The creation of the pieces for the Unisphere was conducted in Harrisburg, Pennsylvania, the heart of steel manufacturing in America. Once fabricated, each piece was shipped by either trucks or trains to Flushing Meadow Park.

The Unisphere took center stage on March 6th, 1963, when members of the New York World's Fair Corporation and dignitaries from around the world gathered in the model room at the fairgrounds to celebrate the beginning of the structure's construction. Present on that day, and from left to right (photo top right), are William E. Potter, Executive Vice President of the New York World's Fair Corporation, unidentified, Thomas J. Deegan, Jr., chairman of the Fair's Executive Committee, Fair President Robert Moses, René Legrain Eiffel, grandson of famous engineer and builder Gustave Eiffel, Roger Blough, chairman of U.S. Steel Corporation, and Baron Alexis de Gunzburg, president of the Eiffel Tower Corporation.

Upon its completion, the Unisphere became a permanent fixture in Flushing Meadows Park and a reminder of mankind's hope for a peaceful world. The second row, left photograph shows a spectacular view of the Unisphere from across the reflection pool in 1965.

In the second row, right photograph we see Moses speaking at the Unisphere ceremony in 1963, where he hosted French diplomats and explained Gilmore D. Clarke's design of the Unisphere and its relationship to the famous Eiffel Tower, which had been the focal point of the Paris World's Fair in 1889. The scale model in the photograph displays the fairgrounds with the towering Unisphere on the far right.

The Unisphere sits in the background of the bottom photograph, which depicts the construction of the Malaysian Pavilion, which represented what was at that time a brand new country. For most Long Island visitors, this was their first introduction to cuisine from the far east.