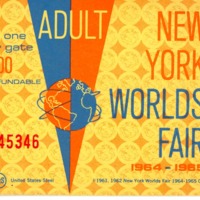 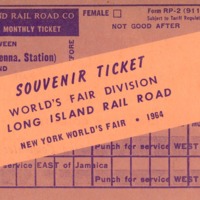 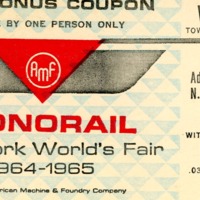 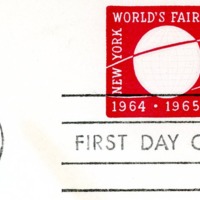 Personal engagement and participation in the 1964 New York World's Fair are represented in these tickets and stamp. Each has a story to tell not only about the fair, but about the owner as well. From left to right:

The Long Island Railroad was an indispensable resource for fairgoers who came from the neighboring counties to the fair. A new station was constructed between the fairgrounds and the newly built Shea Stadium. During the years between the fairs, the station became the United Nations Station, as Flushing Meadows-Corona Park was the temporary site of the U.N. General Assembly before it moved to its current location in midtown Manhattan. This ticket was for a train in 1964.

Innovations in the world of transportation were a highlight of the fair, including the AMF Monorail which circled the Lake Amusement Area on a 40 foot high suspended track. Called "the transportation idea of the future" in the fair's guidebook, the train allowed for spectacular panoramic views of the fairgrounds and only cost 80 cents. Walt Disney would build on this idea for his Walt Disney World Resort in Florida in 1971.

The symbolic Unisphere is the focal point of this collectable stamp from the very first day of the 1964 Fair.