"He Didn't Want to Kill Me" by Anonymous High School Student 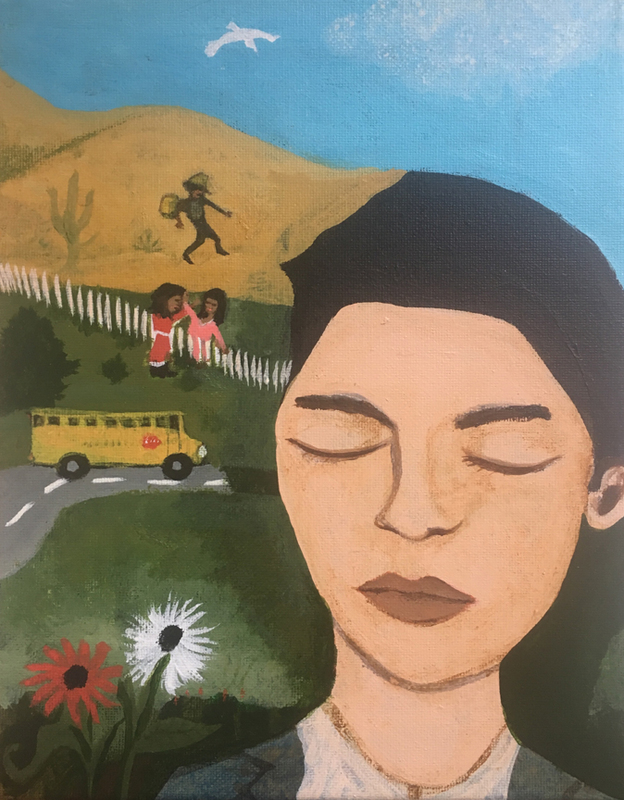 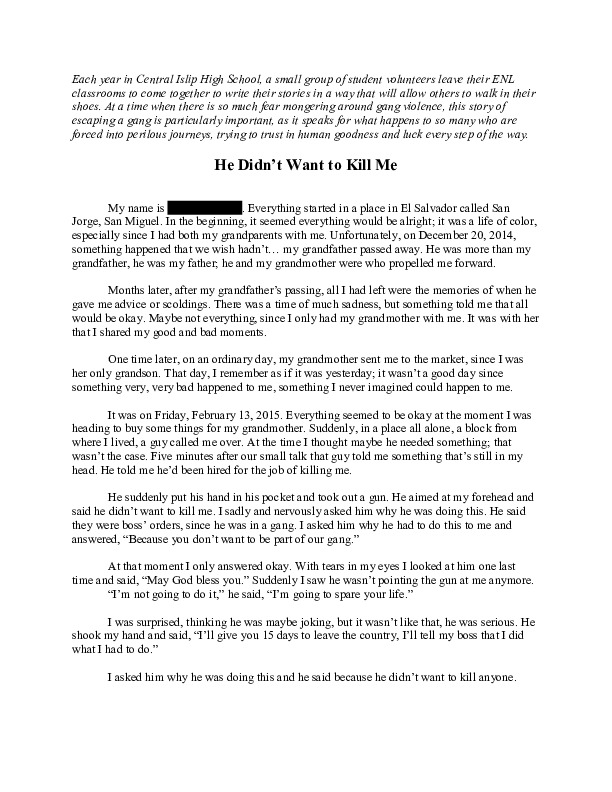 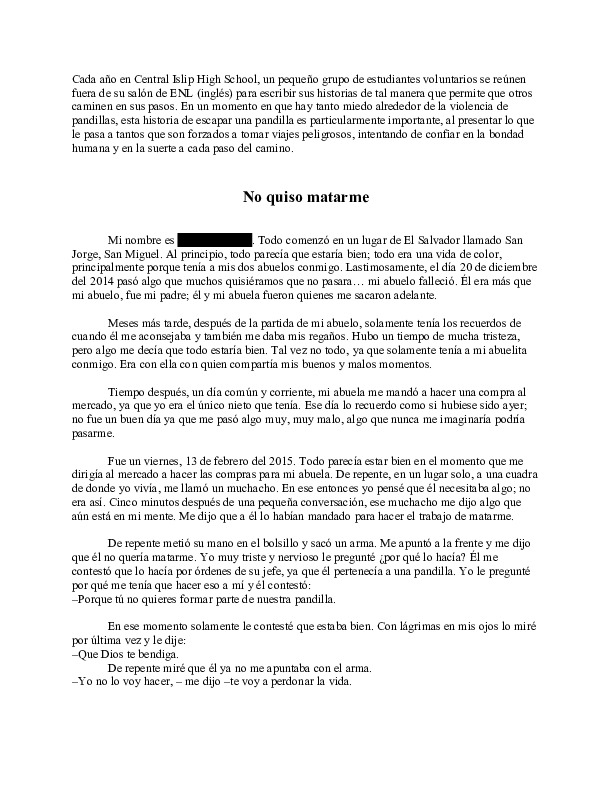 Each year in Central Islip High School, a small group of student volunteers leave their ENL classrooms to come together to write their stories in a way that will allow others to walk in their shoes. At a time when there is so much fear mongering around gang violence, this story of escaping a gang is particularly important, as it speaks for what happens to so many who are forced into perilous journeys, trying to trust in human goodness and luck every step of the way.

He Didn’t Want to Kill Me

My name is ===========. Everything started in a place in El Salvador called San Jorge, San Miguel. In the beginning, it seemed everything would be alright; it was a life of color, especially since I had both my grandparents with me. Unfortunately, on December 20, 2014, something happened that we wish hadn’t… my grandfather passed away. He was more than my grandfather, he was my father; he and my grandmother were who propelled me forward.

Months later, after my grandfather’s passing, all I had left were the memories of when he gave me advice or scoldings. There was a time of much sadness, but something told me that all would be okay. Maybe not everything, since I only had my grandmother with me. It was with her that I shared my good and bad moments.

One time later, on an ordinary day, my grandmother sent me to the market, since I was her only grandson. That day, I remember as if it was yesterday; it wasn’t a good day since something very, very bad happened to me, something I never imagined could happen to me.

It was on Friday, February 13, 2015. Everything seemed to be okay at the moment I was heading to buy some things for my grandmother. Suddenly, in a place all alone, a block from where I lived, a guy called me over. At the time I thought maybe he needed something; that wasn’t the case. Five minutes after our small talk that guy told me something that’s still in my head. He told me he’d been hired for the job of killing me.

He suddenly put his hand in his pocket and took out a gun. He aimed at my forehead and said he didn’t want to kill me. I sadly and nervously asked him why he was doing this. He said they were boss’ orders, since he was in a gang. I asked him why he had to do this to me and answered, “Because you don’t want to be part of our gang.”

At that moment I only answered okay. With tears in my eyes I looked at him one last time and said, “May God bless you.” Suddenly I saw he wasn’t pointing the gun at me anymore.

I was surprised, thinking he was maybe joking, but it wasn’t like that, he was serious. He shook my hand and said, “I’ll give you 15 days to leave the country, I’ll tell my boss that I did what I had to do.”

I asked him why he was doing this and he said because he didn’t want to kill anyone.

Continuing with my story, one Monday afternoon, I heard the cell phone ring in the house; my grandmother answered the call. My grandmother talked on the phone for 10 to 15 minutes before calling me, “My boy, come, they want to talk to you.”

At that moment I asked her who it was and she said it was one of two aunts that lived here in this country. At the time I didn’t know what she wanted to talk to me about until she said, “Juan, do you want to come to the United States?”

In the end I did decide to come to this country and on the way here it was nothing but suffering. You might say, why suffering? And the reason is that on the way here I underwent a lot of hunger, cold, diseases, sadness and the worst problems. I spent an entire week without eating anything, not even a piece of bread. At the same time, I suffered cold in a dark and ugly field in Mexico. One night, I arrived in Mexico City and three days later I arrived to a place close to the Mexico-U.S.A. border.

The person who was bringing me said it was going to be hard crossing the border. At that moment I remembered what my grandmother told me the day I left El Salvador, it’s still in my mind, “My boy, if you’re afraid of crossing the border, just ask God to give you strength.”

And that’s what I did in that moment I feared crossing to another place. Three days later, we finally crossed, it was at night; it’s a day I will never forget.

We were heading to the border when we suddenly heard a Mexican border patrol car. There were also motorcycles and even a helicopter backing them up from the skies. The patrol men chased us; I had to climb a tree so they wouldn’t catch me. My mates from the trip ran in different directions to hide and not be captured.

I spent approximately two-and-a-half hours hidden up in the tree. All I could think of at the time was how they were going to capture me and I wasn’t going to fulfill my dream. A little while later, two immigration agents passed by the tree where I was, they were looking for us. I remember well that one of the agents pulled out a flashlight and lit up exactly the spot where I was: they’d found me and saw that I was very nervous.

The agent asked me why I was hiding. Sad and hopeless I answered, “I was hiding because I didn’t want you to find me or catch me and deport me.”

The agent responded, “Son, don’t be afraid, come down, we’re not going to do anything to you.”

With sadness I climbed down from the tree,

Surprised, I said in my mind, Thank you, God, for putting such good people in my path! Very thankful I said to the agents, “Thank you for your help.”

“Go and make a good future for yourself, and help your family.”

I thanked them once again.

Thank God, who is so good, he allowed me to get here and fulfill my dream of being in this country. Today, I continue to be thankful with each person who was good and bad with me. My aunts, who supported me to be here, my grandmother, my friends, and the people who came with me.

This is all I have to share. I am grateful to the team that allowed me to tell my story and also to everyone else, thank you. It is a pleasure to write for others.