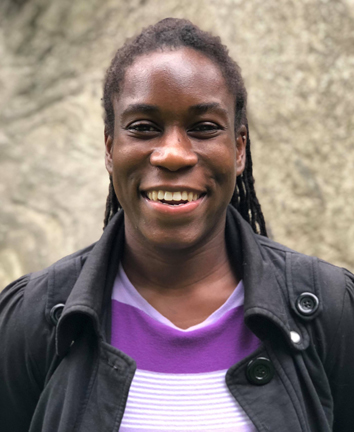 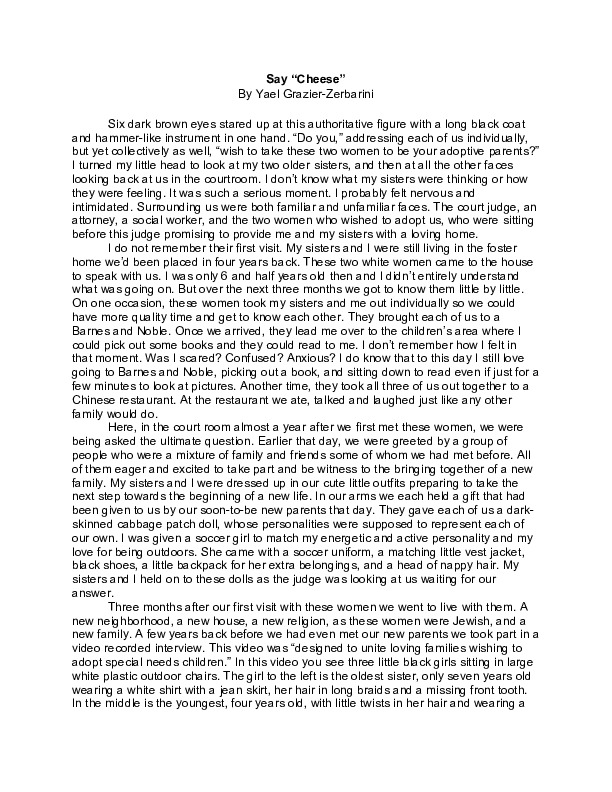 Six dark brown eyes stared up at this authoritative figure with a long black coat and hammer-like instrument in one hand. “Do you,” addressing each of us individually, but yet collectively as well, “wish to take these two women to be your adoptive parents?” I turned my little head to look at my two older sisters, and then at all the other faces looking back at us in the courtroom. I don’t know what my sisters were thinking or how they were feeling. It was such a serious moment. I probably felt nervous and intimidated. Surrounding us were both familiar and unfamiliar faces. The court judge, an attorney, a social worker, and the two women who wished to adopt us, who were sitting before this judge promising to provide me and my sisters with a loving home.

I do not remember their first visit. My sisters and I were still living in the foster home we’d been placed in four years back. These two white women came to the house to speak with us. I was only 6 and half years old then and I didn’t entirely understand what was going on. But over the next three months we got to know them little by little. On one occasion, these women took my sisters and me out individually so we could have more quality time and get to know each other. They brought each of us to a Barnes and Noble. Once we arrived, they lead me over to the children’s area where I could pick out some books and they could read to me. I don’t remember how I felt in that moment. Was I scared? Confused? Anxious? I do know that to this day I still love going to Barnes and Noble, picking out a book, and sitting down to read even if just for a few minutes to look at pictures. Another time, they took all three of us out together to a Chinese restaurant. At the restaurant we ate, talked and laughed just like any other family would do.

Here, in the court room almost a year after we first met these women, we were being asked the ultimate question. Earlier that day, we were greeted by a group of people who were a mixture of family and friends some of whom we had met before. All of them eager and excited to take part and be witness to the bringing together of a new family. My sisters and I were dressed up in our cute little outfits preparing to take the next step towards the beginning of a new life. In our arms we each held a gift that had been given to us by our soon-to-be new parents that day. They gave each of us a dark-skinned cabbage patch doll, whose personalities were supposed to represent each of our own. I was given a soccer girl to match my energetic and active personality and my love for being outdoors. She came with a soccer uniform, a matching little vest jacket, black shoes, a little backpack for her extra belongings, and a head of nappy hair. My sisters and I held on to these dolls as the judge was looking at us waiting for our answer.

Three months after our first visit with these women we went to live with them. A new neighborhood, a new house, a new religion, as these women were Jewish, and a new family. A few years back before we had even met our new parents we took part in a video recorded interview. This video was “designed to unite loving families wishing to adopt special needs children.” In this video you see three little black girls sitting in large white plastic outdoor chairs. The girl to the left is the oldest sister, only seven years old wearing a white shirt with a jean skirt, her hair in long braids and a missing front tooth. In the middle is the youngest, four years old, with little twists in her hair and wearing a denim colored shirt with a patterned skirt. To the right is the middle sister, six years old, who sits upright and cross legged, her natural afro out and wearing a blue dress. Throughout the video the middle sister is sitting poised and upright listening and answering questions when asked. The youngest sister is moving around in her chair as one would expect a four year old to do so, but it is clear she is trying to be on her best behavior. The oldest sister finds something near her feet very interesting, possibly trying to tie her shoes, and pops her toothy grin up only when asked a direct question. The interviewer asks the sisters questions like, what do you like to eat, what do you like to do for fun, and what’s your favorite toy? The oldest had replied that jump rope and hopscotch were her favorite toys. When the interviewer asked if all the sisters could play hopscotch, each sister nodded her head. Right then you see the oldest grabbing the youngest sister’s head lovingly and playfully moving it up and down in agreement.  But one question that the interviewer asks that sticks out is, what type of family do you think you’d like to have? The middle sister responds, very serious and well-mannered, “a mom, and a dad, and an uncle, and sister, brother and a sister, a baby brother and a baby sister, and a grandmom and a grandpop.” The interviewer interrupts, “Oh ok, you want a big family.” The middle sister continues, “And a dog. And a pet too. And I’ll have a little white dog.” Well, we may not have gotten a mom and a dad, and baby brother and sister, but we did get a little white dog. So our new family now consisted of a mom, and another mom, and three sisters, and a little white dog.

Looking back it seems like an unfair question. How did they expect us to respond? What type of family do you want to have? Do you take these women to be your new adoptive parents? So many questions. But what about our questions? Our thoughts and concerns? Three African-American sisters, one seven and a half, one nine, and one ten years of age, sitting in a big room with all of these eyes upon them holding their little dark-skinned cabbage-patch dolls they had just received as a gift from the two white, Jewish women they were being asked to take as their new adoptive parents. A year ago I was living my life with no real conception that I would or could even be part of a new family. For four years, my home was that of the foster family where my sisters and I lived. Though that family could hardly be considered a loving home it was still what I knew. In that family, there was a mother, a father, two teenage daughters, one toddler son, and another toddler grandson. And then there was us. There, no one was bringing us to Barnes and Nobles to read to us or giving us a dark-skinned cabbage-patch doll to call our own. In fact, no one was giving us anything. In that house, my sisters and I didn’t have books and we didn’t have toys. Yet, the two toddlers had their little cars and trucks, stuffed animals, and other items they left around the house. We were given the bare minimum of food and clothes and sometimes not even that. The three of us slept in one room together, that felt more like a cage, but yet it was only there that our imaginations allowed us to free ourselves from our prison.

So when the judge looked at us and asked if we wished to take these women to be our adoptive parents, what choice did we have. Was that really the question that was being asked of us? I don’t think I really knew then or if I really know now, but I don’t think there was hesitation in our reply. Following the signing of the legal documents we grouped together with all the friends and family who had come to take the iconic adoption finalization photo. Facing the camera, big smiles on everyone’s faces, my own included, my sisters and I sat on the laps of our new parents, with our new cabbage-patch dolls and said, “Cheese.”