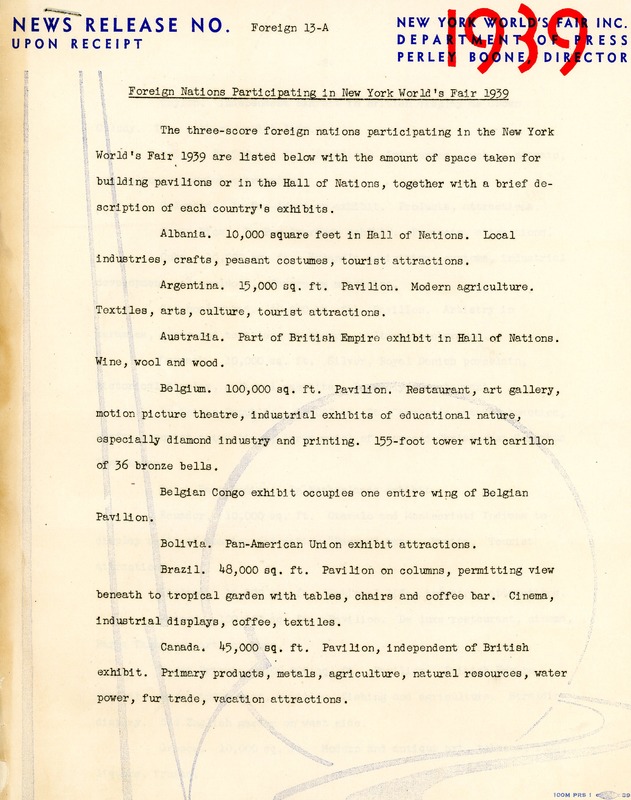 1939 was anything but a peaceful year for Long Islanders concerning the geo-political stage, and this press release is a unique glimpse into the relationship between the World's Fair and the turbulent global politics of the time. For example, one of the original copies of the Magna Carta left Britain for the first time in 1939 and was housed at the British Pavilion. Its safety was called into question at the onset of World War II, however, and it was moved to Fort Knox where it was kept next to the original copy of the American Constitution until 1947. This proved to be a timely decision, as the British pavilion was bombed on July 4th of 1940. Two New York City police officers were killed, and the case remains unsolved to this day.

Also of note in this document is its description of the first appearance at a World's Fair of the Jewish Palestine Pavilion, an introduction to the world to the idea of a modern Jewish state.

According to the press release, the only major country that did not participate in the 1939 World's Fair was Germany, citing budget issues. The USSR Pavilion was dismantled after the 1939 season and did not return for 1940. The pavilions of Poland and Czechoslovakia soon followed, as they fell under Nazi Germany control.