Salvador Dali's "Dream of Venus" at the 1939 World's Fair

The highly imaginative and grandiose personality of Salvador Dali led to one of the most famous sites of the 1939 World's Fair. In the "Dream of Venus" Pavilion, visitors were dazzled by a surrealist interpretation of the similarly named Botticelli piece. Entering through an archway designed as a pair of women's legs, the visitor saw two tanks with live, topless women clad in mermaid garb and sea creature-themed costumes. One such woman can be seen in the accompanying photograph. The sirens swam among original works by the eccentric painter. The pavilion did not escape controversy, as Dali was incensed when the World's Fair Committee denied his request to include a reproduction of Botticelli's Venus with the head of a fish. The "controversial sensation" is described at length in Ingrid Schaffner's Salvador Dali's Dream of Venus: The Surrealist Funhouse from the 1939 World's Fair, which can be found at Hofstra’s Special Collections. 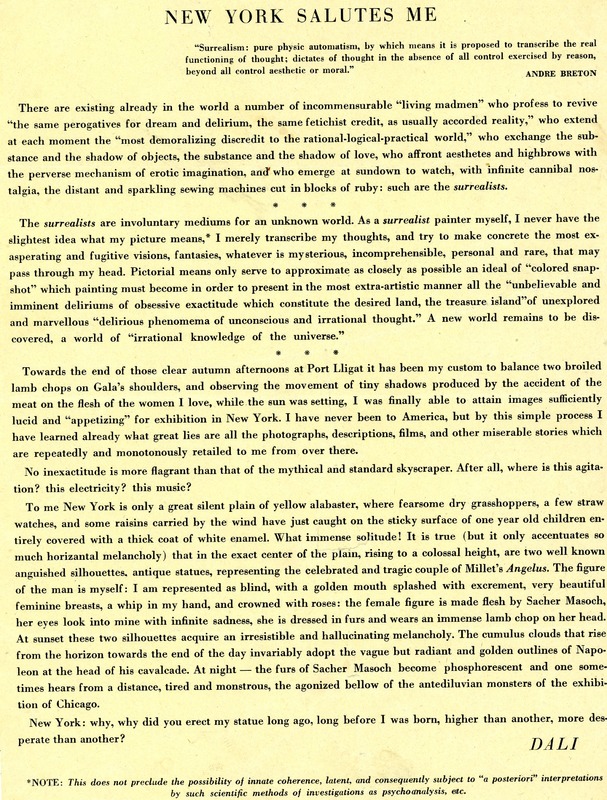 The Dali funhouse in the amusement area at the fair was so successful that it returned for a second season in 1940. The artist’s treatise "New York Salutes Me," written in 1934 before his first trip to the United States, serves as a guide to the thought process behind his works, or lack thereof. He states, "As a surrealist painter myself, I never have the slightest idea what my picture means, I merely transcribe my thoughts, and try to make concrete the most exasperating and fugitive visions, fantasies, whatever is mysterious, incomprehensible, personal and rare, that may pass through my head."