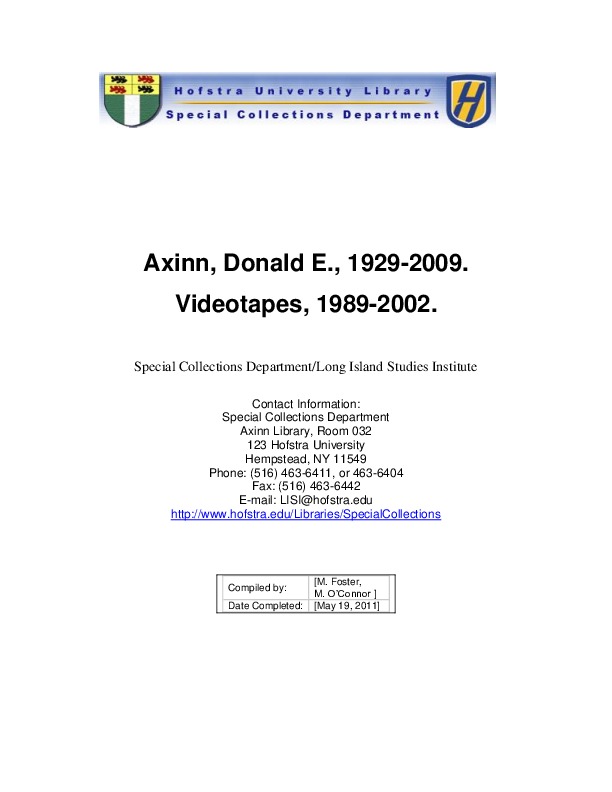 Donald E. Axinn (1929-2009) was an author, poet, aviator and investment banker. Axinn wrote  twelve books of poetry and three novels, including Spin, which was made into a full-length feature film. He founded Donald E. Axinn Companies, a leading investment firm, and served as a director at the publishing house Farrar, Straus & Giroux. He became the Associate Dean of the Hofstra College of Liberal Arts and Sciences in 1971. Axinn served on the Board of Trustees at Hofstra University from February 18, 1970-1979; he was on leave from1979-1984, and fully resigned as of October 25, 1990. (He was made a Trustee Emeritus in 1979.) He also served on the Boards of Trustees for The Cradle of Aviation Museum at Roosevelt Field and the Cold Spring Harbor Laboratory. In 1983, he cofounded the Interfaith Nutrition Network (INN), which feeds and houses the homeless. In acknowledgement of his generosity and many services to the University, the Hofstra University Library was renamed the Joan and Donald E. Axinn Library in a dedication ceremony held in December 1987.

The collection is composed of twenty-one videotapes and one audio cassette tape, all of which feature Donald E. Axinn.  The tapes include interviews, television appearances and recordings of Hofstra’s December 1991 commencement exercises, at which Axinn was an honoree.