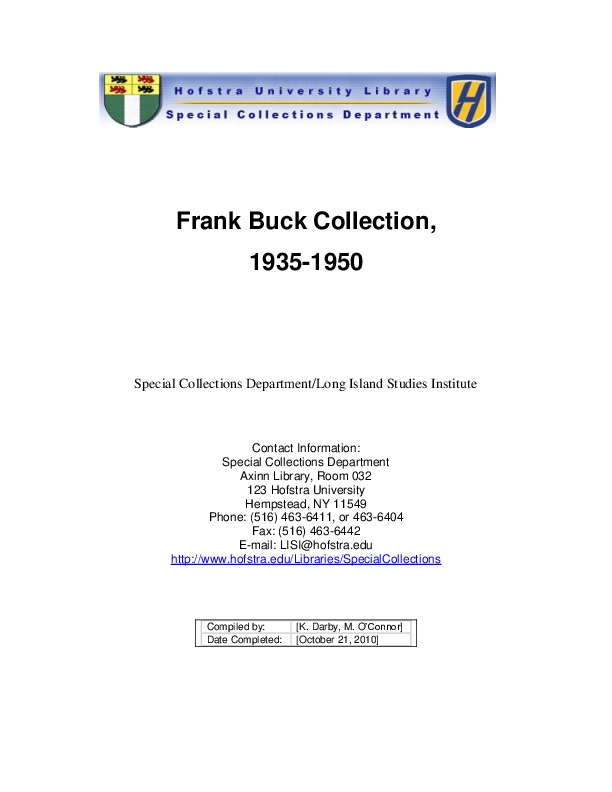 Frank Buck (1884-1950) was a notorious big game hunter and explorer who collected wild animals from around the world. Throughout the 1920s, 30s and 40s, he brought many of these animals to America to exhibit. Buck was also a successful actor, director, writer and producer of jungle adventure movies. He authored several books, his most popular being Bring ‘Em Back Alive, a bestseller in 1930. However, he was most proud of his elementary school reader, On Jungle Trails, which described how he captured wild animals. Buck created successful wild animal exhibits for Chicago’s 1933-1934 Century of Progress Exposition and the 1939-1940 New York World’s Fair. He also toured as the star attraction with Ringling Bros. and Barnum and Bailey Circus in 1938.

For Chicago’s Century of Progress Exposition, Buck created a reproduction of the camp he and his native assistants lived in while collecting animals in Asia. Complete with wild animals, he called it “Frank Buck’s Jungle Camp.” It was one of the fair’s most popular exhibits, attracting over two million people. After the fair closed, Buck moved the camp to a compound on the eastern end of Massapequa, by the border of Amityville, Long Island.

Frank Buck’s Jungle Camp (sometimes referred to as “Jungle Land” or “Long Island Zoo”) sat on forty acres along the newly built Sunrise Highway. Opening its doors in 1934, it contained a menagerie of animals Buck had collected on his hunting expeditions. A two-story Tudor style building close to the road housed reptiles and thousands of birds. The rest of the animals—included among which were elephants, tigers, lions, kangaroos, and bears—were housed in several plain concrete buildings. Located in the center of the grounds, “Monkey Mountain” was one of the zoo’s most popular attractions. The large simulated mountain, which was surrounded by a moat, was occupied by several hundred monkeys at any given time. For a twenty-five cent admissions fee, guests could view the animals, promotional movie posters, and large photographs of Buck’s travels. In addition, souvenirs and refreshments could be purchased at the camp. Buck’s business partner and manager, T.A. Loveland, ran the zoo while Buck was busy traveling, writing, filming movies and giving lectures.

Just before noon on August 21, 1935, 150 of the 570 monkeys housed on “Monkey Mountain” escaped. While engaging in his usual routine of cleaning the mountain, maintenance man Charles Selner absentmindedly left a wooden plank across the moat. The monkeys seized the opportunity for escape, and then fled the camp. They scattered throughout Massapequa and its surrounding towns, where some caused a Long Island Rail Road train to stop, while others caused some near accidents and at least one fender bender. Around twilight, approximately thirty of the monkeys peacefully and willingly returned to the zoo. Thirty-nine more were captured the next day, and by the end of August, all but four of the monkeys were accounted for. (Regrettably, four of the escaped creatures died from electrocution.) In the days after the monkeys’ escape, business was booming at the zoo, with hundreds of curious customers hoping to see the arrival of Frank Buck.

Unfortunately, several employees, including Buck himself, were injured on the zoo premises. Two employees were bitten by snakes, one of which had his chest crushed by a 26-foot python, which led to traumatic pneumonia. Another employee was clawed by a lion and had his shoulder gashed open. Frank Buck was bitten by a python and also was seriously injured after being trampled by a horse. All injures were treated at Reed’s General Hospital in Amityville.

Frank Buck’s Jungle Camp closed sometime in the late 1940s. In the early 1950s, the property’s new owners replaced the camp with a petting zoo and drive-in movie theater. Buck’s business partner, T.A. Loveland, attributed several factors to the closing of the zoo: Sunrise Highway had become a secondary road;  food rationing during World War II made it difficult to get certain foods for the animals; and gas rationing (also due to the war) meant that people weren’t willing to drive the distance to see the camp.

A large flagpole that once stood on Monkey Mountain was moved in 1955 to the home of the mayor of Massapequa at the time, Herman Strully. On March 13, 2010, a storm knocked the historic flagpole down. The current homeowners decided that they would replace the poll with a bronze plaque to honor the rich piece of Massapequa’s history that is “Frank Buck’s Jungle Camp.”

The collection contains thirty 8” x 10” black and white photographs (stamped on the back “Photo by Drennan”) that span from 1935-c.1939. While the majority of the photos were taken at the jungle camp in Massapequa, a small number were taken at a Long Island Rail Road station (most likely at Amityville) and on the road from the train station to the camp. Notable camp photos include one of Frank Buck operating on the ingrown toenail of an Indian elephant, as well as one of him with radio personality John B. Gambling and a rhesus monkey, after the monkeys had escaped from Monkey Mountain in 1935. Also taken at the camp are two photos of U.S. Senator Robert F. Wagner with his son, then-assemblyman and future mayor of New York City Robert F. Wagner, Jr., riding in a basket on an elephant named “Trixie.” Other photos depict elephants—with their feet wrapped in burlap sacks to protect them from the snow—being unloaded from a railroad car or being walked from the railroad station to the camp. (Note: many of the animals pictured in these photos were brought to the U.S. to be part of Buck’s jungle exhibition at the 1939-1940 New York World’s Fair.) 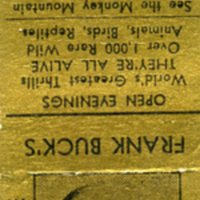 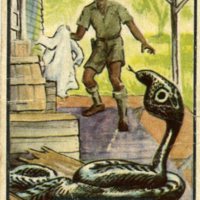 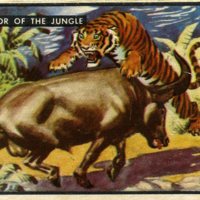 "Bring 'Em Back Alive" Trading Card "Terror of the Jungle" 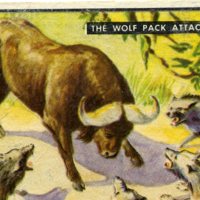 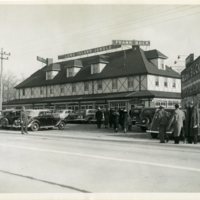 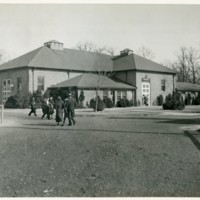 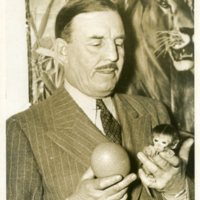 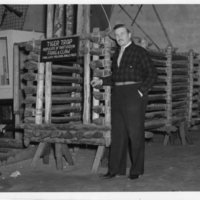 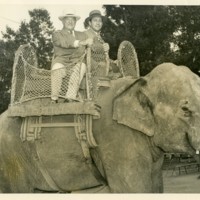 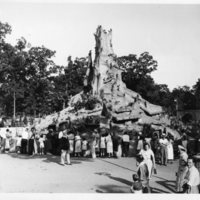 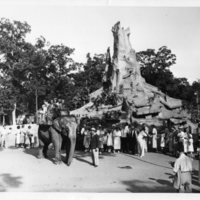 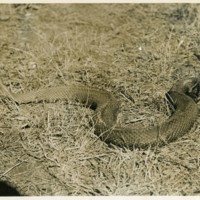 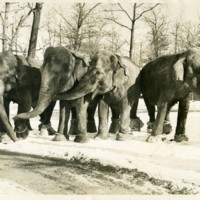 Elephants Standing in the Snow 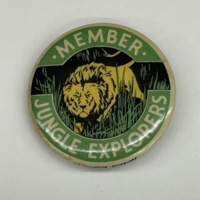 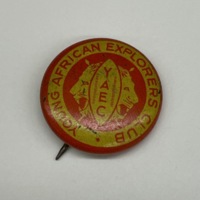 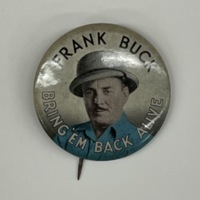