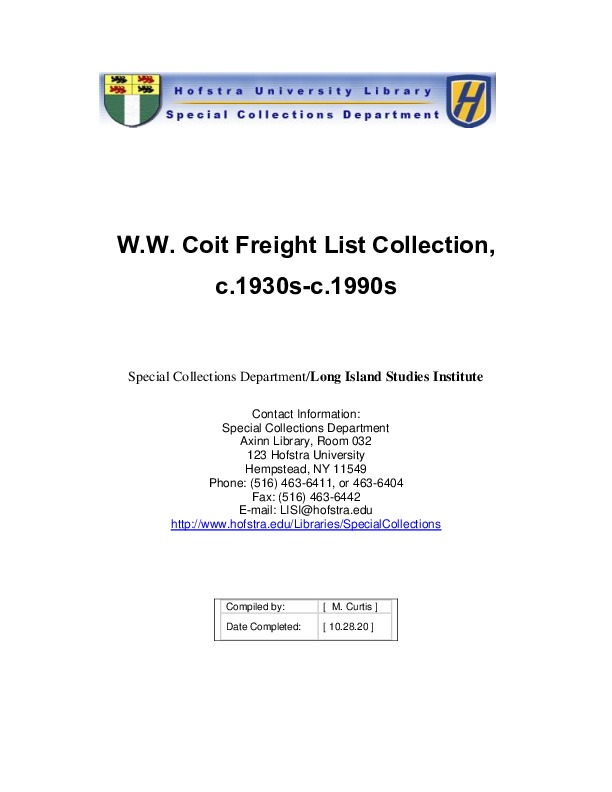 The employment of steamships for cargo and passenger service peaked in the United States in the 1850s, being replaced by railroads. This was not the case, however, on the Long Island Sound. Steamers would remain in operation there throughout the 19th century and even well into the 20th century.  Many of these steamers were “nightboats”: packet ships departing port in the late afternoon to arrival at their final destination around 4 AM the following morning. While hardly convenient for travelers, this night schedule was necessary to get East End produce to the New York City markets, which were already generally active at this hour of the early morning. In addition to providing transportation of agricultural goods, the packet ships also brought stock to East End merchants from New York wholesalers, and, as the East End communities began to become vacation spots and the location of summer homes for well-to-do New Yorkers, provided a way for vacationers and summer residents to escape the city.

The W.W. Coit was a side-wheeler steam ship built in Mystic, CT in 1864. It measured 172 feet in length, and featured a narrow hull with superstructure above it. The superstructure was somewhat wider than the hull, much like a ferry boat. Her Main Deck was enclosed forward to handle freight, while the after part, the ship’s Quarter Deck, contained an entrance hall and thirty berths in the “Ladies Cabin” for women travelling alone. Most of the hull contained the vessel’s big walking-beam engine, but at the ship’s stern was the dining saloon. The Saloon Deck, located above the Main Deck, contained the pilot house as well as thirty-one staterooms. An additional forty-six berths covered by curtains and intended for male passengers were located along the sides of the dining saloon. The W.W. Coit was a small version of a typical Long Island Sound nightboat, but its diminutive size in no way impacted it functionality.

Towards the end of 1873, group of East End investors had grown dissatisfied with the management of the New York Steamship Company, which ran the steamship the J.B. Schuyler between New York City and East End ports a few times each week. The investors decided to form their own company, which would become known as the Montauk and New York Steamship Company after it was reorganized in 1876. The name was somewhat puzzling given the fact the company’s line never ran to Montauk during its lifetime. The Montauk and New York Steamship Company purchased the W.W. Coit in 1874 to serve as their first packet ship, which came on the route under the command of Captain George C. Gibbs, a man who’d served as captain on several steamships plying the route between the city and the East End since 1865. The W.W. Coit would be the company’s sole steamship until the 1886, when, due to an unsuccessful attempt to run a competing steamship by the Long Island Rail Road, the need for both a reorganization of the company (which became the Montauk Steamboat Company with George C. Gibbs as president) and a new steamer became evident. The company ordered one from the Harlan and Hollingsworth yard in Washington, DE, and that ship, the Shelter Island, arrived in time for the 1886 season. The W.W. Coit ran as a second ship on the Fourth of July that year due to the immense number of passengers traveling from the city to the East End, but afterwards was laid up as a spare ship. It was ultimately sold in 1890, finding a new life as an excursion vessel sailing around New York City.

The W.W. Coit would depart from Pier 16 on the East River (located at the foot of Wall Street) at 5 PM every Tuesday, Thursday, and Saturday during the operating season. From there, the ship traveled to the East End and serviced Southold, Orient, New Suffolk, Greenport, and Sag Harbor. On Monday’s, Wednesdays, and Fridays, the W.W. Coit reversed the trip, leaving Sag Harbor at 4 PM, stopping at ports of call along its route, then arrive early the following morning back at Pier 16.

This collection is comprised of six books of freight lists from the W.W. Coit, and a business card for the same. 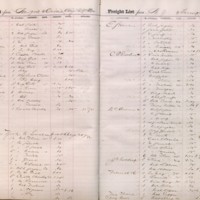 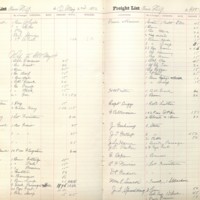 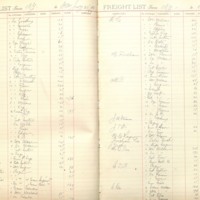 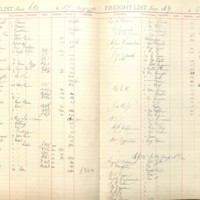 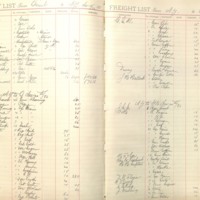 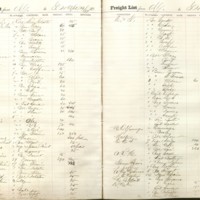